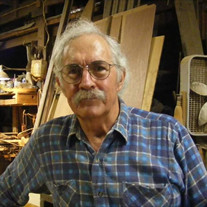 DR. WILLIAM TALLY passed away from the effects of Parkinson’s disease Sunday, July 5, 2020, in Victoria, Texas. William was born January 29, 1944, in Henderson, Louisiana to Bennet Tally and Ella May Arnaud Tally. He was preceded in death by his parents. Dr. Tally graduated from Cecilia High School, attended Tulane University and graduated with a BA in Mathematics from University of Southwest Louisiana in 1968. He earned an MA in Mathematics from University of Michigan and a PhD in Mathematics from Rice University in Houston, TX. William returned to Henderson, Louisiana in the 1980s and was a craftsman and the owner of Swamp Things in Henderson for many years. Dr. Tally also served as a professor and math teacher at colleges and high schools in the area. In 2018, he moved to Victoria, Texas to be near his son and family. William is survived by his son, William “Bill” Bennett Tally (Brenda Serrata) of Victoria, and his grandson, William “Billy” Robert Tally; his siblings, Elizabeth Tally Dupre (James Joseph “J.J.”), Irma Tally Huval, and Jack Tally; and many nieces and nephews in the Lafayette area. Thank you to his special friends, Mr. and Mrs. George Stelly, Louis Guillot, Patricia Tally, and Charlene T. LeBlanc, for their loving support and assistance through the years. The Tally family would like to especially thank Greatwood Homes and the Texas Home Health Hospice for their care and special friendship to Dr. Tally at a time when his family could not be there to help care for him and hug him, due to the novel corona virus (COVID-19) outbreak. Their support for him and his family is greatly appreciated and will not be forgotten. In honor of his love for birdwatching and environmental conservation, William will be put to rest at Eloise Woods Community Natural Burial Park in Cedar Creek, Texas. Donations in his name may be made to Atchafalaya Basinkeeper (P.O. Box 410, Plaquemine. LA 70765), Texas Home Health Hospice (222 W. Grand, Yoakum, TX 77995) or any charity of your choice.

DR. WILLIAM TALLY passed away from the effects of Parkinson&#8217;s disease Sunday, July 5, 2020, in Victoria, Texas. William was born January 29, 1944, in Henderson, Louisiana to Bennet Tally and Ella May Arnaud Tally. He was preceded in... View Obituary & Service Information

The family of William Tally created this Life Tributes page to make it easy to share your memories.

DR. WILLIAM TALLY passed away from the effects of Parkinson’s...