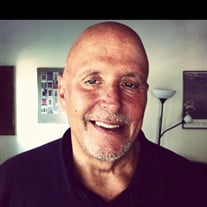 William “Bill” Pattison died of natural causes at home in Austin, Texas on June 16, 2020. William Pattison was born April 30, 1950 in Staten Island, New York to George A. Pattison and Ramona Ribes Pattison. He attended St. Rita’s Elementary School, Monsignor Farrell High School, and received his BA at St. Michael’s in Vermont. He was a competitive athlete choosing basketball as his sport through college. In high school, his teammates nicknamed him Captain Crunch; he had a mean jump shot! His passion for basketball was evident to all who played with and against him. Bill’s career path was in the food service industry. Beginning in Southern California, he worked at Jack in the Box as a District Manager, working his way up to Regional Franchise Consultant, and moved to Austin to operate the restaurants. In the mid-90s, he owned Little Italy, a local restaurant serving authentic Italian food. After the closing of Little Italy, Bill worked at AISD for 15 years managing middle school cafeterias. Cooking and serving food was in his heart and soul. While in Southern California, Bill met and fell in love with Gale Stoll, originally from Taylor, Texas. They married in 1988, moved to Austin, and had two beautiful daughters, Kelly Diane and Erin Kathleen. Kelly is working in Austin in customer service, and Erin is a kindergarten teacher in Bryan. He was a very proud father who loved cooking for and joking around with them. We are thankful for the memories made at the dinner table talking about food, sports, news, and life. Our conversations about every facet of life will be cherished forever. His food was an expression of love to him, and he damn sure had lots of love to spread! Bill was an amazing athlete, cook, father, husband, brother, son, and best friend. His sense of humor, immense wisdom, and work ethic were attributes that he passed down to his two daughters. His laughter always filled the room, usually due to one of his crude jokes or silly comments. He was truly the master of a classic dad joke. Bill was an incredible father and husband, constantly reminding his family of how proud he was of the women we became, and the things we’ve accomplished and overcome in life. He was loved by all who knew him and will be infinitely missed. He is survived by his older sister Patti Powell in Ogden, Utah, and younger brother, Robbie Pattison in Manhattan, New York. In lieu of flowers, you may make a donation to the American Heart Association in memory of Bill.

The family of Bill Pattison created this Life Tributes page to make it easy to share your memories.