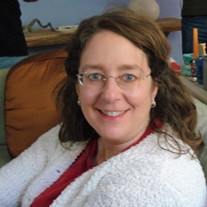 Vivian Ballard, age 60, ended her struggle with aplastic anemia in Austin, Texas on June 15, 2020. Vivian was smart, stubborn, feisty, strong, loving, and generous. She lives on in the hearts of those who fought by her side for justice, education, and equality, and in the hearts of many who benefited from her boundless hospitality and compassion. Vivian was born on January 21, 1960, to Joan Desmond Schenker and Henry Schenker. She was raised in Fairfield, Connecticut; Erie, Pennsylvania; and finally Houston, Texas. As a student at the University of Texas at Austin, she lived at the College House Co-ops, where she met her loving and dedicated husband of 40 years, Jimi Ballard. As a young couple, they lived in Falls Church, Virginia, where her weekly participation in a vigil for the Equal Rights Amendment resulted in a freedom-of-speech lawsuit that is relevant today in light of new fences separating protestors from the White House. Vivian received her Doctor of Jurisprudence from George Washington University before returning to Austin in 1989. She was widely known for her work with the Student Health Advisory Committee of the Austin Independent School District, for her commitment to Congregation Beth Israel, and for her hospitality and attention to special diets as a baker and innkeeper at the gluten-free Austin Fairview Bed-and-Breakfast. Survivors include her husband, James (Jimi) Ballard and daughter Miriam (Mimi) Ballard of Austin, Texas; daughter Rachel Ballard of Seoul, South Korea; mother Joan Schenker and sister Rebecca Schenker of La Grange, Texas; sister Melissa Schenker of Austin, Texas; niece Desmond Magness and nephew Aaron Matlock. She was preceded in death by her father, Henry Schenker. During this time of Covid-19, graveside services at the cemetery of Congregation Beth Israel will be limited to the immediate family. In light of Vivian's activism, the family recommends that memorial donations be directed to Project Corazon, which is run by the Lawyers for Good Government Foundation; Planned Parenthood; or the ACLU.

Vivian Ballard, age 60, ended her struggle with aplastic anemia in Austin, Texas on June 15, 2020. Vivian was smart, stubborn, feisty, strong, loving, and generous. She lives on in the hearts of those who fought by her side for justice, education,... View Obituary & Service Information

The family of Vivian Schenker Ballard created this Life Tributes page to make it easy to share your memories.