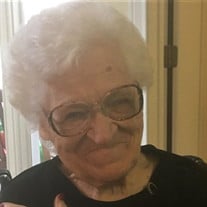 Velma Ruth Cotten, 97, passed away on June 7, 2019, in Austin, TX. Her life began as Velma Ruth Holcomb in the tiny town of Pine Snag, AR born to Ethel and Raymond Holcomb on August 10, 1921. Though she did not finish grade school she was very bright and did receive her GED in the 1980s. During the war, Velma worked at an ammunition factory. She met her loving partner George Cotten when she was working as a waitress in North Little Rock, Arkansas and married him soon after. She worked hard to take care of her family at home and picked up part-time jobs as needed. Additionally, she was active in the education of her children as a volunteer treasurer of the school PTA in the early 1970s. Velma loved Jesus and was very involved in church communities throughout her life. When she was young, her own mother took the family to church every time the doors were open, it did not matter what denomination. They went to all the churches in town at some point. Velma loved to read her bible and study along with her Strong’s Concordance. She was never preachy, but her greatest wish was that her whole family would come to know Jesus Christ. Velma embraced her love of singing by joining church choirs. She sang bass in a ladies quartet in her early adulthood, in church choirs in North Little Rock, AR, and later in life with the Sweet Adelines in Austin, TX. She was sharp as a tack through her mid-80s and always had a great sense of humor. She didn’t tell jokes but could throw a zinger comeback to make you howl. She always loved a good laugh. Velma found joy painting landscapes and flowers, searching for bargains and collectibles at garage sales, and reading detective stories. Velma was always giving to someone whether it be the church, a worthy organization or anyone who was in need. When her mother developed Parkinson’s disease Velma provided her loving care. Additionally, after taking care of her father-in-law, she became a private caregiver for others outside of the family. Velma is survived by her children Darryl Parkinson, Mary Dee Danchenko-Stout, and Dianne Cotten; grandchildren Kerry Parkinson-Pearson, Matt Murphy, and Josh Murphy; and great-grandson Kai Pearson.

Velma Ruth Cotten, 97, passed away on June 7, 2019, in Austin, TX. Her life began as Velma Ruth Holcomb in the tiny town of Pine Snag, AR born to Ethel and Raymond Holcomb on August 10, 1921. Though she did not finish grade school she was... View Obituary & Service Information

The family of Velma Ruth Cotten created this Life Tributes page to make it easy to share your memories.