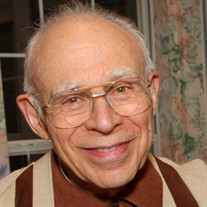 On November 16, 2019, Theodore “Ted” Lobsenz passed away at age 89. Actively engaged with his family and community until the end, he will be deeply missed by his widow Janet; children and spouses Andrew (Susan), Joanne (Scott), and James (Eileen); grandchildren Alex, Sarah, Michael, David, Josh, Aaron, and Daniel; and the scores of people and organizations to which he contributed and with which he was involved. Ted was born in 1930 in New Jersey. He was an extraordinarily bright child, skipping a grade of school. He graduated from Brown University in 1951, Yale University Law School in 1954, and served in the United States Air Force, and earned an LLM from New York University Law School. He married Janet in 1957, and they enjoyed 63 happy and fruitful years together. Ted’s most outstanding attribute was his unstinting devotion to his family. To say he was a dutiful son would be a gross understatement. He sacrificed his career as a promising attorney in order to join his father’s business in place of the planned path of his brother Arthur, who died tragically of polio in 1949. Ted remained in business with his father until it was sold in 1980. For the remainder of his parents’ long lives (mother Doris lived to age 102 and father Meyer lived to age 97), he was a constant presence. If something was broken (and it often was), Ted would fix it. If financial matters needed tending, Ted was there. If a medical problem arose, Ted was both chauffeur and ombudsman. But even as devoted as he was to his parents, Ted was doubly devoted to his wife, children, and grandchildren. He was always, ALWAYS there, ready to provide advice or to assist in any way. He provided insight on countless children’s writing assignments. Among other things, he built too many Pinewood Derby cars, a huge bingo board for Barnert Temple, a buzzer system for high school Quiz Bowl, and a computer scoring game for duplicate bridge. His work often prioritized the functional over the aesthetic but was always greatly appreciated by the recipients. In the last decade of his life (after moving to Texas), he and Janet became serious duplicate bridge players and making many new friends. Indeed, he was so devoted to his family that he seldom sought outside companionship but relished the opportunity to see his loved ones as much as possible. In lieu of flowers, donations to the Leukemia and Lymphoma Society, the American Heart Association, or St. David’s Hospital Round Rock will be greatly appreciated.

On November 16, 2019, Theodore &#8220;Ted&#8221; Lobsenz passed away at age 89. Actively engaged with his family and community until the end, he will be deeply missed by his widow Janet; children and spouses Andrew (Susan), Joanne (Scott),... View Obituary & Service Information

The family of Ted Lobsenz created this Life Tributes page to make it easy to share your memories.