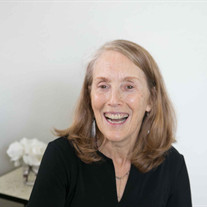 Suzanne Winkelman lived her life with an unmatched ability to focus on the important and let go of the rest. She approached everyone with a genuine smile, and with her superpower of letting go of the unimportant, she saw and brought out the best in people, even if it sometimes meant speaking truth to power – like when she told her future husband, her boss at the time, that he should be nicer to everyone. She leaves a legacy that will be honored and continued by her three children, Eli, Alex, and Jacob, her grandchild Asher, and her husband Marc. She is also survived by her father and two brothers. Suzanne was born on May 15, 1953 to Pauline and Bernard Jonas in Detroit. She was the youngest of three children, with two older brothers Marc and Shmaya. Her kind spirit and love of animals was evident from an early age as she would often rescue and nurture injured and abandoned animals, a passion she would continue throughout her life. Caring was a hallmark of Suzanne’s life as she was called to a career in nursing and volunteering formally with organizations like Austin Wildlife Rescue, KLRU, and Legacy of Giving, and informally (picking up litter as she walked, helping a community member take care of triplets, and more). In 2007, Suzanne and Marc received the LBJ Humanitarian Award, and in 2012 the family was honored with the Maislin Humanitarian Award from the Anti-Defamation League. Suzanne was so proud of the little known fact that she earned a Kundalini yoga instructor certificate. She would not approve of this obituary and would instead say to her children, “We’re not spending money on an obituary, give it to Wildlife Rescue. Be nice to each other, especially at the funeral which is at 1:30 on Friday at Congregation Agudas Achim (at the Dell Jewish Community Center), followed by a graveside service at Austin Memorial Park Cemetery.” The family expresses extreme gratitude to Suzanne’s caregivers and large circle of friends who brought her so much joy. In lieu of flowers, honor Suzanne’s legacies with donations to worldcentralkitchen.org, , austinwildliferescue.org, and rescue.org.

Suzanne Winkelman lived her life with an unmatched ability to focus on the important and let go of the rest. She approached everyone with a genuine smile, and with her superpower of letting go of the unimportant, she saw and brought out the... View Obituary & Service Information

The family of Suzanne Winkelman created this Life Tributes page to make it easy to share your memories.

Suzanne Winkelman lived her life with an unmatched ability to...