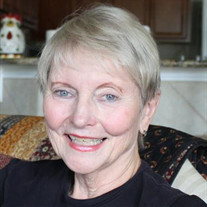 Laura Suzanne (“Sue”) Andrew Burton, 86, was welcomed into the arms of Jesus on the evening of February 9, 2020, at her home in Austin, Texas. She was a lovely, vivacious, selfless woman, who brought light and joy to all she met. In a word, she was special. Born in Dallas, Texas, on July 14, 1933, the only child of John “Jack” and Esther (Butler) Andrew, Sue moved to Austin to attend the University of Texas where she became a member of the Delta Delta Delta sorority and earned her Bachelor of Arts degree In Business Administration. After graduating in 1954, she married her college sweetheart, John Mark Kinney. They moved with their year old daughter to the territory of Alaska in 1958 to serve as Episcopal missionaries. After a second daughter was born, the family moved to a Native Alaskan village where they lived in a primitive log cabin without electricity or running water and traveled by dogsled. After the birth of their first son, John was assigned to a church in Dallas. Another son and daughter were born there before the family moved to Austin in 1967 so that John could attend graduate school. Sue began working at The University as a part-time secretary and remained there throughout her thirty-five year career, ultimately as associate vice president in the Office of the Dean of Graduate Studies. Sue was a devout Christian and member of St. Matthew’s Episcopal Church in Austin for almost 50 years where she served in many capacities, including alter guild, flower guild, choir and vestry member and serving as a Stephens Minister. She spoke frequently about her faith and demonstrated that strength in the face of diversity, especially after the loss of two of her children. It was at St. Matthews that she met her second husband, John Granville Burton, Jr., whom she married in 2004. Sue loved her family above all and was thrilled to marry into John’s large family and did her best to blend his with hers. She was as much a mother to her new adult step-children as she was to her own children, just as she had served as a surrogate mom to so many all her life. Sue’s doors were always open to everyone, especially those in need. After family and faith, Sue’s many interests included cooking and entertaining, playing bridge, flower arranging, painting and writing, and Longhorn and Cowboys football. She loved to travel; she and John visited numerous countries in six continents. More than anything, Sue aspired to be a good Christian and a good mother. She was truly loved by everyone who was blessed to know her and she will be greatly missed. Sue is survived by her three children, Laura Westcott (Danny Armacost) of Austin, Chad Kinney (Kim) of Gig Harbor, WA, and Shannon Harris (Tim) of San Antonio, Texas; four step-children, Blaine (Curley) Stacy of Houston, Texas, Amy (Fred) Stillwell of Marietta, Georgia, Ann Burton of Marietta, Georgia and Ruby Ann (Buzz Gray) Burton of Katy, Texas, as well as many grandchildren, great-grandchildren and extended family. She was preceded in death by her parents and her children, Shawn and Mark Kinney. A memorial service will be held at 2 pm on Monday, February 24, 2020, at St. Matthews Episcopal Church, 8134 Mesa Dr., Austin, Texas, 78759 with The Rev. Christian Hawley officiating. In lieu of flowers, donations may be made to St. Matthew’s Episcopal Church or the charity of your choice.

Laura Suzanne (&#8220;Sue&#8221;) Andrew Burton, 86, was welcomed into the arms of Jesus on the evening of February 9, 2020, at her home in Austin, Texas. She was a lovely, vivacious, selfless woman, who brought light and joy to all she met.... View Obituary & Service Information

The family of Sue Andrew Burton created this Life Tributes page to make it easy to share your memories.