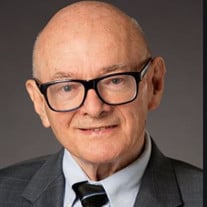 Steve Edward Kornguth, also known by his Hebrew name Shimmon Zemel Elijahu, passed away on September 21, 2020 in the company of his family. He lived a dynamic and consequential life, full of love, learning and reflection through faith, art, science and music. His professional accomplishments were many, but Steve cherished his family more than anything, especially his wife of 62 years, Peggy. The depth of their love was evident throughout their long marriage, and especially poignant through the many health challenges Peggy has endured and overcome. Throughout, Steve kept her top of mind and found ways to express it daily, from bringing her gifts to reading poetry to writing love notes for her and otherwise showing up in all the ways a genuinely loving husband can for his wife. Their love stands as a shining example of the best a couple can be to those of us lucky enough to have witnessed it. Steve was a great pianist, an operaphile, and believer in the ability of arts and music to shape and reflect the best of humanity. He derived great pleasure from planning and taking trips with family, where he sought to explore and understand other cultures. He was an avid reader and an easy conversationalist. Steve was one of the smartest people most of us knew. He approached education - both teaching and learning - with sincerity, intentionality and enthusiasm. The value of education was instilled in him by his immigrant family. Born in the Bronx, New York in 1935, he drew pride and identity from his Jewish faith and the influences of his hard-working parents Helen and Eugene, his brother Marty, and his many cousins, aunts and uncles. He relished memories about walks he and Marty took around the streets of New York, as well as their musical performances and laughing fits they would fall into, usually in the middle of earnest moments when their parents disciplined them. Steve also loved his encounters with his Uncle Moritz, who dressed in spats, suits and straw hats and modeled “correctness and gentlemanliness,” traits Steve valued. He felt that the early education he received at Stuyvesant High School and then Columbia University, where he earned his B.A., provided the foundation for his lifelong pursuit of scientific knowledge and understanding. After earning a PhD in Biochemistry from the University of Wisconsin-Madison, he returned to New York City for post-doctoral research. Shortly thereafter, he went back to Madison, where he was a professor of neurology and biomolecular chemistry at the University of Wisconsin from 1962 to 1998 and was awarded tenure. He had a robust research portfolio throughout his career, while he was also deeply engaged in teaching and mentoring students. He studied the biological basis of neurological disorders, auto-immune diseases and the development of binding agents and platforms for sensors and magnetic resonance image contrast materials. He served as Director of Neuroscience programs at the National Science Foundation for two years, and in 1998, saving the best for last, finished his career as a Texas Longhorn, where he directed the Biological and Chemical Countermeasures Program and studied how to sustain and enhance performance of soldiers. He served on the Army Science Board from 2004 to 2013, and in his final years, was proud to be part of the faculty at Dell Medical School at The University of Texas. In recent years, Steve returned to his life-long passion of teaching undergraduate students while continuing his research projects. He wanted to find new ways of getting liberal arts students interested in scientific methods and inquiry. For his class’s final exam, Steve asked his students to explain how themes found in literature can be viewed similarly to the concepts seen in auto-immune diseases. For those who knew Steve, this approach was radical enough to make perfect sense. His students and co-workers were inspired by Steve’s energy and commitment to those around him, even as his health failed. Even within a month of his passing, Steve was busy working on a submission for publication. It seems like the worst of times for someone with such wisdom, zest for life and good nature to leave us, but his spirit is carrying forth in those who knew and loved him, especially his beloved wife Peggy, brother Martin and Phyllis, son David, daughter Ingrid and James, and much-adored grandchildren, Benjamin, Gabriela (both in Austin), Lindsay (New York) and Greg (San Francisco). Steve’s family extends our heartfelt appreciation to his many friends and colleagues who meant so much to him. We also thank the caring and engaged staff of the Village at the Triangle, who went above and beyond in small and big ways to help him and us, and Halcyon Home, whose caregivers and Hospice team provided loving and attentive care throughout these last weeks. In lieu of flowers, please consider a donation to the Mulva Clinic for the Neurosciences at the Dell Medical School at The University of Texas to honor Steve’s commitment to student learning and research.

Steve Edward Kornguth, also known by his Hebrew name Shimmon Zemel Elijahu, passed away on September 21, 2020 in the company of his family. He lived a dynamic and consequential life, full of love, learning and reflection through faith, art,... View Obituary & Service Information

The family of Steven Edward Kornguth created this Life Tributes page to make it easy to share your memories.