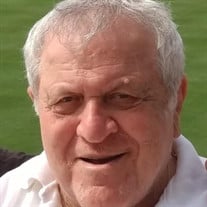 Stanley Ramati was born on July 1st, 1937 in London to Philip and Tilly Hyman. The youngest of three children, Stanley never knew his older brother Jackie, who died before he was born. Stan was given the Hebrew name Shalom as a symbol of the peace he brought to the family. However, he enjoyed a long and loving relationship with his older sister Helen, who died last year during Kol Nidre. Stan grew up during the Blitz and attended British Public Schools. He was an active member of Habonim. Among his contemporaries was the Playwright, Harold Pinter. Stan served in the British Royal Air Force, including being on active duty, during the 1956 Suez crisis. In 1961, he made Aliyah to Israel. He lived on the Kibbutz, Beit HaEmek, and served in the armored division of the Israeli Defense Forces. Stan's unit captured the Golan Heights during the Six Day War in 1967. In 1970, while working to place Jewish, Non-Israeli's into Kibbutzim, he met his future wife, Dorothy. She was set to live at a different Kibbutz, until he was able to convince her to live at his. He told her, "why would you want to just be around more Americans?" They married on August 27, 1970 in Herzliya, Israel. Later that year, they moved to the states, settling in Birmingham, Alabama. In Birmingham, Stan began his career in Jewish social work and his love for Alabama football, during the Bear Bryant years. In Birmingham they started their family and had two sons, Phillip and Alex. While working for the Jewish Federation of Birmingham, Stan earned his bachelor's degree at the University of Alabama - Birmingham. In January 1976, the family moved to Savannah, Georgia, where Stan became the Executive Director of the Jewish Federation and the Jewish Education Alliance (JEA), Savannah's JCC. Stan was one of the strongest federation directors in the country. He was extremely involved in relocation of Soviet Jews to Israel and America. Stan directly helped many Russian families settle in Savannah and become active parts of the Savannah Jewish community. Stan spearheaded the building fund to renovate the JEA. Stan had similar roles in San Antonio, Texas and Reading, Pennsylvania before retiring to Raleigh, North Carolina in 2006. The best part of retirement was becoming a grandfather or "Zayde" to Jake in 2007 and Allie in 2011. And in 2018, Stan & Dorothy moved to Austin, Texas to be closer to their grandchildren. Because of his fluency in Hebrew and Jewish customs, he was often consulted on any matter of Judaism. He also became infamous for leading exceedingly long Passover Seders. In addition to his passion for the state of Israel and being Jewish, Stan loved cricket, soccer, rugby and tea as any true Englishman would. He was a passionate reader and kept many libraries and bookstores in business. One of Stan's favorite hobbies growing up was stamp collecting. He later sold his beloved stamp collection to buy his first house in Birmingham. Besides his family, his loves included Alabama Football, Tottenham Hotspurs Soccer and New York Mets Baseball. He also liked Georgia Football (but only because his sons and a good amount of his money went there). He also loved the movies, British Television and Documentaries. His favorite food was dessert. Stan is survived by his wife of almost 50 years, Dorothy, his two sons, Phillip and Alex, his daughter-in-law, Becca, and his two grandchildren, Jake and Allie. He also leaves behind a large family of loved ones in Israel, England and Australia. In lieu of flowers, please make a donation to two charities meaningful to Stan: StandWithUs https://www.standwithus.com/donate The Humane Society (please support your local chapter): https://www.humanesociety.org/how-you-can-help You are welcome to join the Austin Natural Funerals Facebook page at 11 am on July 14th to attend the funeral virtually https://www.facebook.com/AustinNaturalFunerals The livestream feed will begin a little before 11 am.

Stanley Ramati was born on July 1st, 1937 in London to Philip and Tilly Hyman. The youngest of three children, Stanley never knew his older brother Jackie, who died before he was born. Stan was given the Hebrew name Shalom as a symbol of the... View Obituary & Service Information

The family of Stanley Ramati created this Life Tributes page to make it easy to share your memories.