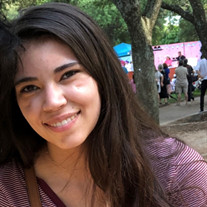 Sophia Gabriel Carson passed away on December 24th, 2021. She was a beloved daughter, sister, cousin, niece, granddaughter and friend. Sophia spent her earliest years in Pearland, Texas, and grew up in Richland, Washington and Austin, Texas. In Richland, Sophia attended Sacajawea Elementary School and Enterprise Middle School. She was a member of All Saints' Episcopal Church. She met many people who had a lifelong influence on her and developed a love for the Pacific Northwest. She loved the outdoors and had a deep curiosity and appreciation of nature and life. She began learning to play the guitar and enjoyed running, hiking, swimming, skiing, golfing, volunteering with her church family and in the community, and laughing with her family and friends. After moving with her family to Austin at the age of twelve, Sophia switched her musical focus to classical guitar. She was also a gifted artist and photographer. She attended NYOS Charter School and thrived in the close knit community of faculty, staff and students. She participated in and took on leadership roles in Science Olympiad, Youth in Government, and Yearbook as an editor. Always inquisitive, she founded the philosophy club and practiced her reasoning and debate skills on her parents. She was also a talented baker, creating delicious food for friends and family alike. Sophia's love for animals influenced her volunteer work with cats, and she fostered many litters of kittens, eventually adopting her "darling" kitty, Orange Julius. She also claimed one of the family chickens as her own, naming her Untitled Document. Upon graduation, Sophia returned to the area of the country she most loved to attend Reed College in Portland, Oregon, where she majored in Economics. During the pandemic, she began working at a Thai Restaurant and when the public health situation finally allowed for travel, she cooked a delicious feast for her family in Austin. True to her name, Sophia was a wise and bright light to the world. Her compassion for others was apparent in her drive to help those most in need. She expressed a passion for active engagement in the struggle for equality and justice. As a sister and daughter, Sophia was loving and kind, caring for her younger brother, then her little cousins, whom she adored. She had a witty, mischievous personality, playing pranks, usually on her sister and lifelong friend, as well as her uncle. She loved debates and was known for winning most arguments. Fiercely independent, she was constantly on the move, always running and exploring new ideas and places. Sophia is survived by her parents, James and Elena "Lena" Carson; sister, Isabela "Bela" Carson; brother, Nicolas "Nico" Carson; aunts Cari Carson (Matt) Dietz, Diana Carin Lucero, Marisa (Paul) Durfee, Celia Vieau; uncle Marco Rangel; cousins Anastacia Lucero, Nichole Lucero, Sydney Dietz, Carson Dietz, Crisanto Durfee, Camillo Durfee, Anela Vieau, Isaiah Vettraino, Evaliese Vieau, Ignacio Durfee, Messina Durfee; grandparents Arturo and Betty Rangel and Paul and Pat Carson, as well as many great-aunts, great-uncles, and other extended family members. Sophia is preceded in death by her beloved aunt and friend Mariam Carson, and great-aunt, Anne Carson. Sophia will be greatly missed by her parents, siblings, extended family and friends. A memorial service will be held at 11:00 a.m. on Saturday, January 15, 2022 at Christ Episcopal Church, 3520 W Whitestone Blvd, Cedar Park, Texas 78613. The service will be available online at the Christ Episcopal Church Cedar Park pages on both YouTube and Facebook. One of Sophia's legacies is her work to help others in great need. We are comforted by the knowledge that Sophia's joy, hope and wisdom will continue to shine on in our lives and in the world. To continue the good work Sophia was doing in the world, donations in her memory can be made to Friends of the Children- Austin or Portland.

Sophia Gabriel Carson passed away on December 24th, 2021. She was a beloved daughter, sister, cousin, niece, granddaughter and friend. Sophia spent her earliest years in Pearland, Texas, and grew up in Richland, Washington and Austin, Texas. In... View Obituary & Service Information

The family of Sophia Gabriel Carson created this Life Tributes page to make it easy to share your memories.