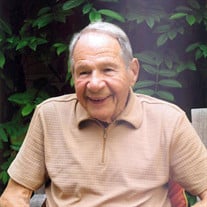 On Friday, December 11, 2020, Sigmund Jucker, one of the original brothers and founders of Three Brothers Bakery, passed away peacefully at the age of 98. Sigmund was born on February 23, 1922, in a small Polish town called Chrzanow to Morris Jucker and Bertha Siegal Jucker. He was a twin and the second oldest of four children. From an early age, Sigmund along with his siblings, were the 4th generation to work in his family's small bakery which was established in 1825. Although he always dreamed of being a scientist and was an excellent student, his dreams were dashed when the war broke out in Europe in 1939. At 17, he was sent to concentration camps and survived the horrors during the Holocaust until he was liberated on May 8th, 1945. Several years later he left Germany with his brothers and followed his sister to Houston to start a new life. Upon arrival in Houston, Sigmund, his twin brother Sol and younger brother, Max, worked at Hanke Pilot’s bakery. Shortly thereafter, the three brothers purchased the old Meshkat bakery at Holman and LaBranch, across from Temple Beth Israel, and renamed it Three Brothers Bakery. He worked 6 days a week, 16 hour days for more than 50 years with his brothers by his side to build a business which would become Houston's premier kosher-style bakery and a place where memories have been made for 4-5 generations of Houstonians. Three Brothers Bakery introduced the city of Houston to bagels, challahs and many other Jewish and European foods which didn't exist before they opened their first store. People would come from all over the state to buy the pastries, breads and cakes which they are famous for today. He passed the legacy on to his son who continues the tradition as the 5th generation of the family bakers. In 1958, he met and married Edith Bannet while on vacation in Israel and returned to Houston where they made a life together for almost 40 years. He was proud of his three children and always worked hard to provide for them and give them all the opportunities he never experienced because of the Holocaust. Sigmund had a passion for health and exercise and knew at an early age that good food kept you healthy. He loved to eat, but had a strict diet of his famous rye bread and mostly vegetables so he always stayed fit. He also loved the outdoors and would kayak at Lake Conroe on his day off and snow skied until he was in his early 70s. His grandchildren would watch in amazement when he did 100 push ups at the age of 80 years-old. His joy in life were his three children and five grandchildren. He was most proud of his family and their accomplishments and cherished spending time with them. He also enjoyed spending time with his dear friends, Joe Robledo and Clyde Cannon, who was the very first customer of Three Brothers Bakery at Holman and LaBranch. Sigmund was preceded in death by his parents, Morris Jucker and Bertha Siegel Jucker; his sister, Janie Rudy and his brothers, Solomon and Max Jucker. He is survived by Edith Jucker, sister-in-law, Estelle Jucker, son, Robert Jucker (Janice Jucker) daughter, Susan Goldberg (Jeff Goldberg) and daughter, Michelle Jucker; grandchildren, Jason and Joshua Jucker (Alyssa Jucker) and Stephanie, Jordan and Evan Goldberg and numerous nieces and nephews. In lieu of flowers, please consider a donation to Holocaust Museum Houston, Emergency Aid Coalition or your local Food Bank in Sigmund Jucker's memory.

On Friday, December 11, 2020, Sigmund Jucker, one of the original brothers and founders of Three Brothers Bakery, passed away peacefully at the age of 98. Sigmund was born on February 23, 1922, in a small Polish town called Chrzanow to Morris... View Obituary & Service Information

The family of Sigmund Jucker created this Life Tributes page to make it easy to share your memories.