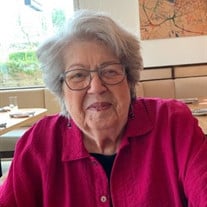 Shirley Rubinett, 94, was a true woman of valor. She excelled in all she did: as a loving companion and source of support for her husband of 67 years, Jarrell “Tank” Rubinett; as the mother of three independent-minded children who relied on her counsel throughout their lives; as an adored grandmother (“Muzz”) of five who considered her a rock star (“the coolest woman I know”); as a mother-in-law extraordinaire; and as a beloved sister, aunt, cousin, and long-time friend to many who universally considered it an honor to know her. She had perfect attendance in all of the major and not so major events of her grandchildren’s lives. Born in Port Arthur, Texas to Mollie and Jake Bagelman, she moved to Austin to attend the University of Texas and Austin became her home. She married Tank at 19 (much to her parents’ chagrin) and the two were very much a team in business, family, and the Jewish community. She was generous, open to new ideas and experiences, and vibrant to the end. She was a great listener and someone to whom people gravitated. Muzz was predeceased by her parents and her husband, Jarrell Rubinett. She is survived by children Gordon and Susan Rubinett, Benita Rubinett and Larry Elsner, and Lynn Rubinett and Rick Levy; grandchildren Sara Rubinett and Nicole Roberts, Sophie Elsner and Tom Marcello, Rose Levy and Bo Delp, Isaac Levy-Rubinett and Aurora Silva, and Jesse Levy-Rubinett; great-grandchild Bran whose antics entertained her via FaceTime throughout the pandemic; and sister Joanie Shapiro and husband Al, and brother Leonard Bagelman. Funeral and burial services will be held Friday morning, 27 August at 11:00 am in the Agudas Achim section of Austin Memorial Park. The family encourages the community to attend via live stream using the following link- https://www.facebook.com/AustinNaturalFunerals. A Facebook account is not required. A live stream of the funeral service will appear on the Austin Natural Funerals Facebook page shortly before 11 am on Friday, August 27th. If a pop-up window appears asking you to log in click "not now" and the live stream will be available for you to watch. If the "not now" button does not appear, scroll down on the page and it will come up for you to select. In lieu of flowers, the family requests that donations may be made in Shirley's (a"h) loving memory: Aytz Chaim Foundation of Congregation Agudas Achim https://congregationagudasachim.shulcloud.com/form/give Jewish Family Service of Shalom Austin https://shalomaustin.org/jfs/

Shirley Rubinett, 94, was a true woman of valor. She excelled in all she did: as a loving companion and source of support for her husband of 67 years, Jarrell &#8220;Tank&#8221; Rubinett; as the mother of three independent-minded children who... View Obituary & Service Information

The family of Shirley Rubinett created this Life Tributes page to make it easy to share your memories.

Shirley Rubinett, 94, was a true woman of valor. She excelled...