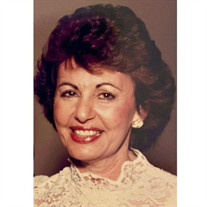 Sheila Iris Hamovit Zimmerman Moser passed on February 15, 2022. Her life and lasting legacy may be simply summarized by a core of three foundations: family, faith and friends. Sheila was born on March 10, 1933 in Tampa, Florida to Rose and Frank Hamovit, and moved first to Yonkers, New York and then to Houston when she was young where she began establishing some life-long friendships. Growing up, Sheila held court at the family's diner, befriending and brightening the day of its patrons. Sheila then attended the University of Texas at Austin where she met and married Hal Zimmerman, returned to Houston and raised four children. She went back to school to become a travel agent and started a successful travel agency with her cousin, Zella Silverman, which allowed her to travel the world. Sheila later married Irving Moser, with whom she had a loving relationship until his death in 2006. For the past 6 years she has lived in Austin so she could be closer to her children, grandchildren and great-grandchildren. Sheila's first priority was always clear - her family. From a wide cousin group who were close friends growing up in Houston, to her husbands and children, she put family first. From family reunions measuring in the hundreds to Friday night family Shabbat meals with one of her children's families, Sheila was there. From her children's games and recitals to family holiday gatherings, Sheila was there. It would be hard to think of a family-related event where she wasn't there. First as Mom, then as Mimi, it was her family that always came first. Sheila's embrace of her Jewish religion and upbringing remained core to her. As a teen, she was active in the B'nai Brith Youth Organization, in college the SDT sorority, and the Temple Emanu El Sisterhood and Hadassah as an adult. Religious services and schools permeated the family she nurtured and cultivated. Volunteering time for countless Jewish organizations filled her calendar. And then there were Sheila's friends. Many seventy-five year plus best friend relationships. A very social person, she made friends wherever she went for her entire life. Tennis games, parties, celebrations, temple events, lunch bunches, neighbors, Mah Jong and bridge. And all the ordinary, everyday interactions where Sheila's energy, enthusiasm and intelligence shone through. It was fun and stimulating to be around her. Sheila follows her parents, brother Jerry and husbands Hal and Irv in passing. She is survived by her sister-in-law Joelle Hamovit, her four children and their spouses - Cindy Boldebuck and Harry Zimmerman, Nancy and Bruce Zimmerman, Linda and Keith Zimmerman, and Felice and Pat Carmichael, her nine grandchildren - Amy (Bryan), Adam, Eric (Megan), Ryan (Kari), Brett (Meredith), Tracy, Cole, Julian and Stella - and two great-grandchildren, Charlie and Levi. She will be buried in Houston by her family on Friday, February 18, 2022, at 11:00 a.m. at Emanu El Memorial Park. The service can be attended virtually using the following Zoom link: https://us02web.zoom.us/j/7138754811?pwd=U1pBdFlwUmZkM2VnVmpiUjNjNlZjUT09 Meeting ID: 713 875 4811 Passcode: WFC2013 One tap mobile +13462487799,,7138754811#,,,,*2645483# US (Houston) +16699006833,,7138754811#,,,,*2645483# US (San Jose) Dial by your location +1 346 248 7799 US (Houston) +1 669 900 6833 US (San Jose) +1 253 215 8782 US (Tacoma) +1 301 715 8592 US (Washington DC) +1 312 626 6799 US (Chicago) +1 929 205 6099 US (New York) Meeting ID: 713 875 4811 Passcode: 2645483 Find your local number: https://us02web.zoom.us/u/kDwovUM7L. In lieu of gifts, please consider a donation to the Jewish Family Service of Austin (www.shalomaustin.org/jfs), Jewish Family Service of Houston (www.jfshouston.org/donate) or Kids Meals, Inc. (www.kidsmealsinc.org/give).

Sheila Iris Hamovit Zimmerman Moser passed on February 15, 2022. Her life and lasting legacy may be simply summarized by a core of three foundations: family, faith and friends. Sheila was born on March 10, 1933 in Tampa, Florida to Rose and... View Obituary & Service Information

The family of Sheila Iris Hamovit Zimmerman Moser created this Life Tributes page to make it easy to share your memories.