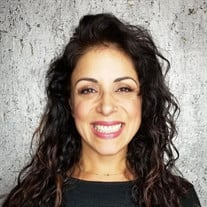 Dr. Shaida Ziari vom Eigen, age 46, of Austin passed on Sunday, February 10, 2019 after a long battle with cancer. Shaida was born to Manouch and Fouzi Ziari on January 9, 1973. She moved to the United States from Babol, Iran with her family in 1979 fleeing religious persecution as Iranian Bahai’s. She moved to Round Rock in 1980. After graduating from Round Rock High School, she attended Texas A&M University. She obtained her medical degree from University of Texas Health Science Center- San Antonio and completed her pediatric residency at University of Texas Houston Medical School. Shaida moved back to Austin in 2006. She has been a pediatric hospitalist for the last 12 years, initially with South Austin Medical Center and then with Dell Children’s Medical Center since 2008. She took great pride in caring for her patients and their families and also training young doctors to do the same. She was well known for demanding perfect patient presentations during her rounds. Shaida married Aaron vom Eigen on April 24th, 2009. They have 3 children: Zarrin Alexandra and twins Taj Gregory and Matin Cyrus. She is also survived by her brother Sean Ziari and sister in law Alison and 3 nieces: Audrey Mojdeh, Emma Marjan and Grace Laila Ziari. She also has countless extended family in the Austin area, in Iran and across the world. Shaida loved being connected to people. She had a strong network of friends, both physical and online. She was active in many social groups: mommies of girls, mommies at Doss Elementary, mommies with twins, mommies of toddlers with diabetes, women physicians, women pediatricians, and women physicians with cancer. There are many things all of us remember about Shaida. She loved being an Austinite: the food, the music and the weird vibe. She loved to travel; she visited more than 8 countries and was fluently trilingual. Many of Shaida’s friends know that she was a trivia master, makeup goddess and a fashionista. By far, the love of her life was her children. They know that, too. In recent days, when a dear friend offered to make her famous morning glory muffins, Taj spoke up and said, “Don’t forget the love!” She and Zarrin enjoyed cuddling while binge watching baking shows while Matin bounced happily around them on the bed. Shaida will remain in the hearts of the hundreds of people she loved sharing her life with. Services will be held on Wednesday, February 13, 2019 at Lady Bird Johnson Wildflower Center at 11:45 A.M. Reception to follow.

Dr. Shaida Ziari vom Eigen, age 46, of Austin passed on Sunday, February 10, 2019 after a long battle with cancer. Shaida was born to Manouch and Fouzi Ziari on January 9, 1973. She moved to the United States from Babol, Iran with her family... View Obituary & Service Information

The family of Shaida Ziari vom Eigen created this Life Tributes page to make it easy to share your memories.