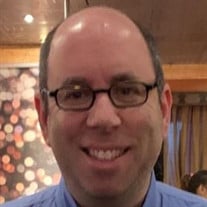 Roger Frank Hirsch, of Austin, TX, passed away on Friday, October 16 at the age of 47. Roger was born and raised in Memphis, TN and graduated from Christian Brothers High School in 1991. While growing up in Memphis, Roger was active in the Temple Israel youth group, Henry S. Jacobs Camp, and enjoyed playing a variety of sports, including varsity tennis. He attended and graduated from the University of Texas in 1995 and went on to get his MBA from St. Edward’s University. Roger remained active in sports throughout his adulthood, continuing to play golf and tennis and passing that love onto his children. Although a graduate of UT and a Longhorn fan, Roger remained a forever fan of Alabama football. Roger sat on the board of South Austin Baseball for many years and was instrumental in the league’s recent growth. He was a member of Temple Beth Shalom and had the joy of watching his oldest son become a bar mitzvah there last October. Roger was an amazing father to his three young children and was a dedicated husband. His children were the light of his life, and he loved watching them grow. He delighted and found great joy in all they did. Roger was preceded in death by his father, Michael Hirsch. Roger is survived by his wife, Leslie Wearb Hirsch, and sons, Meyer, Solomon and Elliott; his mother, Roslyn Diamond Hirsch Clark (Charles); his brothers, Geoffrey Hirsch (Marci) and Scott Hirsch, and his stepsister, Tara Cumberland (Jason); his sisters-in-law, Alison Earnest (Scott) and Rebecca Johnson (Seth); his nieces and nephews, Michael and Lily Hirsch, Carson and Wyatt Earnest, William and Henry Johnson, and Cybil and Davis Cumberland; and his large extended family of aunts, uncles and cousins. He loved his family deeply and cherished his friends. A private graveside service will be held on Tuesday, October 20th at 2 pm. A livestream of the graveside service will begin on the Austin Natural Funerals Facebook page shortly before 2 pm. Use this link https://www.facebook.com/AustinNaturalFunerals to join. In lieu of flowers, those wishing to express sympathy, please make a memorial donation in Roger’s name to the American Heart Association, Henry S. Jacobs Camp or South Austin Baseball.

Roger Frank Hirsch, of Austin, TX, passed away on Friday, October 16 at the age of 47. Roger was born and raised in Memphis, TN and graduated from Christian Brothers High School in 1991. While growing up in Memphis, Roger was active in the Temple... View Obituary & Service Information

The family of Roger Frank Hirsch created this Life Tributes page to make it easy to share your memories.