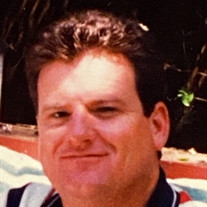 It is with great sadness that the family of Richard Dean Jones announce Richard’s passing. Richard was born on May 12, 1959, in Gatesville, Texas to Jane Sadler and Bobby Dean Jones. Richard passed away on February 25, 2020, in Austin, Texas after a long illness. He was 60 years of age. Richard grew up in Gatesville and graduated from Gatesville High School in 1977. Richard had many interests growing up in Gatesville including a successful high school sports career. Richard led the Gatesville Hornet football team as quarterback his junior and senior year and played on the Hornet baseball team all four years in high school. It was this participation in sports that bonded Richard with many lifelong friends. After graduation from Gatesville High School, Richard attended the University of Texas at Austin where he obtained a Bachelor of Science degree in Advertising. Richard spent his career in the insurance and real estate industries where he loved to “sell”. He changed the energy in every room in which he entered. Richard will be remembered as fun-loving and always willing to share his opinion no matter the subject. He spent all of his adult life in Austin and enjoyed the many things Austin has to offer especially music. Richard particularly enjoyed Willie Nelson, Waylon Jennings, Merle Haggard and, of course, Elvis. Richard also enjoyed cooking and the culinary world as well as college football. He had a particular fondness for the Alabama Roll Tide going all the way back to the legendary coach Paul “Bear” Bryant. But his ultimate passion was his family and especially his two girls. Richard is survived by two daughters, Brooke Elizabeth Jones of Austin and Raquel Isabella Jones of Los Angeles, CA; one grandson, Asher Jones of Austin; his mother Jane Sadler Jones of Gatesville; three brothers Brian Sadler Jones and his wife Sandy of Austin, Philip Polk Jones and his wife Kim of Waco, and Robert Walker Jones and his wife Marsha of Austin; one niece Amy Leigh Jones of Austin, two nephews Robert Marx Jones of Austin and Jackson James Jones of College Station and many loving aunts, uncles and cousins. Richard is preceded in death by his father Bobby Dean Jones and grandparents Mr. and Mrs. Hershel G. Jones and Mr. and Mrs. CK Sadler. A celebration of Richard’s life will be held on Saturday, March 28th from 4-6 pm at Rancher’s Steak House and Grill in Gatesville, Texas. Contributions in memory of Richard Dean Jones may be made to Hospice Austin, 4107 Spicewood Springs Road, Austin, Texas 78759

It is with great sadness that the family of Richard Dean Jones announce Richard&#8217;s passing. Richard was born on May 12, 1959, in Gatesville, Texas to Jane Sadler and Bobby Dean Jones. Richard passed away on February 25, 2020, in Austin,... View Obituary & Service Information

The family of Richard Dean Jones created this Life Tributes page to make it easy to share your memories.

It is with great sadness that the family of Richard Dean Jones...