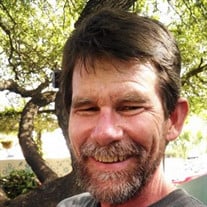 Peter Chapman Van Metre (b. 1-18-56) died on Saturday evening May 8, 2021 in a tragic motor vehicle accident in East Texas, en route to visit his oldest daughter and her family. He was 65. His wife Barbara Mahler was critically injured and remains hospitalized. Their beloved dog Bella was also killed. Born in Waterloo, the youngest son of Judge and Mrs. Peter and Lucie Van Metre, Pete (then known as “Chip”) graduated from West High School in 1974, where he was a champion wrestler and average student, before going onto college at the U. of Iowa and then the U. of South Florida. He married Lynn Elikan and raised 3 children in Tampa, FL; Tacoma, WA; Tucson, AZ; and Austin, TX. He married Barbara in 2007, his partner in work and in life. Pete was active, thoughtful, supportive, and kind, a good person, and a great dad. Pete’s 40-year career at the U.S. Geological Survey began as a technician and ended as scientist emeritus. Along the way, he earned an M.S. in Hydrology from the U. of Arizona at age 33 and a Ph.D. in Geology from the University of Rouen, France, at age 51. An athlete and outdoorsman in his youth, he became a pioneering environmental scientist, authoring over 100 scientific articles on water quality, and beloved as a mentor and colleague. His discovery that polycyclic aromatic hydrocarbons (known human carcinogens) were increasing in U.S. water bodies over time due to the coal-tar sealant used on parking lots and other surfaces led him to testify before Congress and to state and municipal bans that protect 25 million Americans today and counting. Pete received a Department of the Interior Meritorious Service Award in 2017 and retired in Fall 2020. When not Thinking Great Thoughts, Pete was planning to work with Barbara in their heirloom apple orchard in southwestern New Mexico, enjoy life off the grid in the south of France, relax with friends at their home in Austin, paint more, talk politics with his brother, and spend time with his 3 grown children and 3 young grandchildren. Since 2017, Pete and Barb had rebuilt the unkempt orchard, rapidly learning to be orchardists, handcrafting cider on a 100+ year old press, and sharing the project lovingly with family and friends, new and old. Pete is survived by his wife Barbara, his brother Joseph (Susan), his former wife Lynn and their children Laura (Aaron Baum), Emily (Jordan Krinsky), and Sam and grandchildren (Mira, Yael, Miles), and his stepmother Jan Van Metre of Waterloo. He is preceded in death by his brother Charlie, father Peter Van Metre, and mother Lucie Rathert. The funeral service took place May 14, 2021 at Eloise Woods Natural Burial Park in Austin, TX. Pete was quick to smile and every project he undertook was full of laughter. He lived a rich, full life, and we bid him farewell much too soon. Pete was a good citizen and a steward of the planet. In lieu of flowers, please consider a donation to the Percha-Animas Watershed Association (near his orchard in New Mexico), Save our Springs (in Austin), the Sierra Club, or other charity of your choice. For tax exempt donations to the watershed, checks should be made out to “Southwest Research and Information Center” and mailed to Max Yeh, P.O. Box 156, Hillsboro, NM 88042. Correspondences can be sent to [email protected] or c/o Laura Baum, 256 McKinley Ave, New Haven, CT, 06515 (after 7/1). Thank you for visiting Peter Chapman Van Metre's Tribute page. Please reach out to [email protected] for anything. You may follow Barbara's progress here: https://www.caringbridge.org/visit/barbaramahler Donations in Dad's memory are gratefully accepted at a charity of your choice. Some ideas below: Percha-Animas Watershed Association in Kingston, NM near the apple orchard* Sierra Club (local or national chapters) Save Our Springs (Austin charity that he supported) Texas Husky Rescue (where Bella was from) *for tax exempt donation to the watershed: 1. The check is made out to Southwest Research and Information Center (SRIC). 2. SRIC is located at 105 Stanford, SE, PO Box 4524, Albuquerque, N.M. 87916. 3. Telephone: (505) 262-1862; email: [email protected]; contact person: Don Hancock. 4. SRIC is a 501(c)(3) charitable organization with the EIN 23-7159949. 5. Accompanying letter should specify that the donation is for the Hillsboro/PAWA Litigation Fund in honor of Peter Van Metre. With love, Laura, Emily, and Sam

Peter Chapman Van Metre (b. 1-18-56) died on Saturday evening May 8, 2021 in a tragic motor vehicle accident in East Texas, en route to visit his oldest daughter and her family. He was 65. His wife Barbara Mahler was critically injured and remains... View Obituary & Service Information

The family of Peter Chapman Van Metre created this Life Tributes page to make it easy to share your memories.