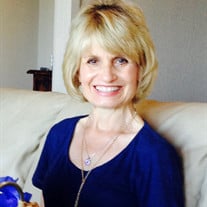 Paula S. Parker (Golter) Leary Paula S. Parker Leary (Golter) passed away peacefully at home on February 11, 2022, in Austin, TX, surrounded by loved ones. Paula was born on April 25, 1955 to Janell (Hill) Rohwer and Paul Golter of Orchard, NE. She was baptized and confirmed in the Lutheran faith. Paula was a graduate of Creighton, NE high school and the University of Nebraska Business College. She served in the United States Air Force for seven years. Paula lived most of her adult life in Austin, employed in medical sales. It is in Austin that she met the love of her life, Jack Leary. They were married in 2010. She gained an instant family with his children, Erin, Ryan, and Chelsea. She was an avid lover of books and shared that passion with her siblings, nieces, nephews, and friends. She volunteered, with Jack at the Micah 6 of Austin Food Pantry. One of her greatest joys was spending time with her family, spread across several states. Paula's generosity and kindness showed in her love of giving to those in need and to those less fortunate. She always saw the positive and good in every person and touched the lives of so many. While we were all working to make a living and plan for retirement, Paula left those plans for her up to God and gave generously for her entire life. Paula is survived by her husband Jack and his children. Also, her mother, Janell Rohwer of Lincoln. The eldest of seven children, Paula will be lovingly remembered by sisters: Lilli (Gigi) Inness, Gretchen Golter, Julie Glandt, Melanie Golter, and Amy Linderman, and her brother, Brian. Her smiling presence will be missed by her extended family including Marilyn Golter, Justin Golter, Heidi Webb, Pam and Harry Mendez and many nieces, nephews, and other loved ones. She was currently a member of the St. Louis King of France Catholic Church of Austin. Memorials can be made in her name to the church, Micah 6 of Austin Food Pantry, or the charity of your choice. https://www.micah6austin.org Services will be Monday, February 14th at 3:00 p.m. St.Louis King of France 7601 Burnet Road Austin, Texas. A live stream of her funeral service will appear on the Austin Natural Funerals Facebook page, https://www.facebook.com/AustinNaturalFunerals, shortly before 3 pm on Monday, February 14th. A Facebook account is not required in order to watch. If a pop-up window appears asking you to log in click "not now" and the live stream will be available for you to watch. If the "not now" button does not appear, scroll down on the page and it will come up for you to select.

The family of Paula Sue Parker created this Life Tributes page to make it easy to share your memories.