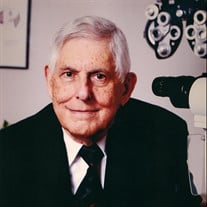 Dr. Neil R. Gurwitz, born on February 12, 1929, in Laredo, Texas, passed away peacefully at his home on September 24, 2021, at the age of 92. The son of Sam and Anna Gurwitz, Dr. Gurwitz lived the American dream. He was a first-generation American. Neil moved to Bastrop, Texas, when he was in high school. After graduating Valedictorian from Bastrop High School in 1946, he attended Texas A&M University and graduated from Southern College of Optometry in Memphis, Tennessee. Dr. Gurwitz was a practicing optometrist in Bastrop for 56 years and was a member of the American and Texas Optometric Associations. Dr. Gurwitz loved the town his father chose as home and was active in civic, school, and community service all his life. While waiting for a commission as an optometrist in 1950, he enlisted and served in the Army Reserves and continued in the medical section for almost ten years. He served on the Bastrop Library Board for about 12 years, the Bastrop ISD School Board for more than 7 years, and the Bastrop City Council for over 13 years. He was a member of the Bastrop Noon Lions Club and Bastrop Chamber of Commerce for more than 50 years. He was also a Board Member of the Bastrop Economic Development Corporation from its inception, serving for more than 20 years. Neil was a longtime member of the Texas Jewish Historical Society and Congregation Beth Israel in Austin, Texas. Neil was honored as Bastrop Citizen of the Year in 2000 and in 2014 received a Lifetime Achievement recognition by the Bastrop Chamber of Commerce. The Bastrop High School Alumni Association recognized Neil as an Outstanding Bastrop High School Graduate. He was also honored by the Masonic Lodge in 1997 with its Community Builder Award. Neil Gurwitz was an optometrist loved by all, an avid historian, genealogist, photographer, and a technology enthusiast. Neil loved Bastrop and started a website over twenty years ago devoted to the Bastrop community. He was one of the Texas A&M Aggies’ biggest fans, attending almost every Aggie/UT football game for over 50 years. He was a perfect role model, and never will there be such a kind, funny, caring, helpful, honest, and knowledgeable person. Neil was preceded in death by his parents Anna and Sam Gurwitz, sisters Nell Rose Gurwitz and Pauline Gurwitz Kress, and brother Arthur Gurwitz. Neil is survived by his wife of 65 years, Betty, and three children: Anita Feigenbaum and spouse Leslie of College Station, Karen Kahan and spouse David of Bastrop, and Elliott Gurwitz and spouse Emily of San Antonio, and his pride and delight, Sarah and Ryan Feigenbaum, Philip and Steven Kahan, and Ethan and Zoe Gurwitz. Neil is also survived by many loved nieces, nephews, cousins, extended family, and dear friends. Many thanks to the devoted caregivers, Dr. Steven Booton and staff, Texas Home Health, and other medical staff who assisted him. In lieu of flowers, memorial contributions may be made to the Bastrop County Historical Society, Relay for Life of Southern Bastrop County, CBI-Technology Fund or a charity of your choice. Due to Covid concerns, there will be a small private family burial on September 27, 2021. The family encourages the community to attend via live stream using the following link-https://www.facebook.com/AustinNaturalFunerals/. A Facebook account is not required. A live stream of the funeral service will appear on the Austin Natural Funerals Facebook page shortly before 11 am on Monday, September 27th. If a pop-up window appears asking you to log in click "not now" and the live stream will be available for you to watch. If the "not now" button does not appear, scroll down on the page and it will come up for you to select.

Dr. Neil R. Gurwitz, born on February 12, 1929, in Laredo, Texas, passed away peacefully at his home on September 24, 2021, at the age of 92. The son of Sam and Anna Gurwitz, Dr. Gurwitz lived the American dream. He was a first-generation American.... View Obituary & Service Information

The family of Dr. Neil Ross Gurwitz created this Life Tributes page to make it easy to share your memories.