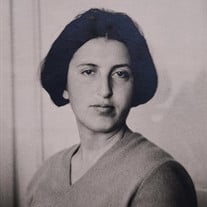 Nechama (a"h) was both of and ahead of her time. Born, Nechama Penina Bernstein (a"h), on February 15, 1935 in Jerusalem in what was then Palestine, the youngest of four children. She came from a very religious family. Her own mother died of cancer when she was ten and that singular event shaped who she was for the rest of her life. She watched the state of Israel be born, recalling many years later how, in 1947, she huddled around a neighbor's radio to listen to the UN vote to establish the state of Israel. Her deep love for that state prompted her to serve in the IDF even though girls from religious families usually deferred to National Service. Having come from a religious background, she wasn't expected or even encouraged to pursue any kind of higher education, but she put herself through undergraduate studies at Hebrew University, earning a degree in Biology and eventually went on to earn a Masters and PhD in Radiation Biology. She worked for many years as a cancer researcher at M.D. Anderson Hospital in Houston. She was also a passionate maker, always convinced that she could recreate (or frankly make better) any meal she ate or item she purchased. She was a person of immense energy. So. Much. Energy. She filled, inhabited, molded every room she was in. She was a life force. She also deeply and unreservedly loved her children, wanting them to have security in her love and presence. She was preceded in death by her eldest son, Amos Dubrawsky (Z"L). She is survived by Chagai Dubrawsky, her husband of 60 years, her daughter Malka Dubrawsky, and her son, Ido Dubrawsky as well as her six grandchildren: Sarah, Rachel, Avi, Isaac, Hadas, and Rinat. A live stream of her funeral service will appear on the Austin Natural Funerals Facebook page, https://www.facebook.com/AustinNaturalFunerals, shortly before 3 pm on Monday, January 10th. A Facebook account is not required in order to watch. If a pop-up window appears asking you to log in click "not now" and the live stream will be available for you to watch. If the "not now" button does not appear, scroll down on the page and it will come up for you to select.

Nechama (a"h) was both of and ahead of her time. Born, Nechama Penina Bernstein (a"h), on February 15, 1935 in Jerusalem in what was then Palestine, the youngest of four children. She came from a very religious family. Her own mother died... View Obituary & Service Information

The family of Nechama Penina Dubrawsky created this Life Tributes page to make it easy to share your memories.

Nechama (a&quot;h) was both of and ahead of her time.