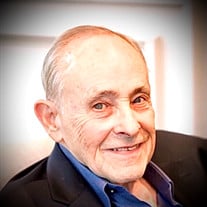 Krumholz, Morton Lang With the passing of Morton L. Krumholz, we lose a selfless servant to our community and the patriarch of his close and loving family. Morton was born on April 17, 1933. He graduated from John Tyler High School, received his Bachelor of Science degree from Texas A&M University in just three years, graduating at the top of his class, and remained a life-long Aggie supporter and fan. He then graduated at the top of his class from the University of Texas School of Dentistry in 1957. Morton remained a student of his profession, attending The University of Pennsylvania to further his periodontal and other training and went on to found the Austin Academy of Implant Dentistry, serve as President and Charter Member of Central Texas Institute for Implant Studies, and was inducted as a Fellow into the American College of Dentistry. During his service as an officer in the Army, Morton married his wife of 33 years, Lois Rosenthal Krumholz, and moved to Austin where Morton and Lois raised their three children, Robert, Julie and Richard. After Lois passed away in 1991, Morton married Golda Susie Krumholz; Morton and Susie cherished their years together and were inseparable for the almost three decades they were together. Both welcomed each other’s children into their already large families. Morton began his 50-plus year career in dentistry in Austin, always striving to provide the very best care to each of his patients. Throughout his career, he built strong personal and professional bonds with his patients and colleagues alike, whom he truly treated like family. To his last day, his two longest standing dental hygienists stayed in close contact, and even in his decline had lunch with him on a weekly basis. Morton was also a leader in the Austin community, serving in just about every role as a long-time member of Temple Beth Israel, including as President of the congregation for several years. In 1999, Morton helped lead an effort to found Temple Beth Shalom, located alongside the Dell Jewish Community Center, bringing together much of the Austin Jewish community onto one campus. He also served on the Board of the Jewish Federation, an advisor to the Jewish Community Center of Austin, and was both an active and a behind-the-scenes guide to many significant initiatives throughout the community. Morton was truly a humble servant to all. Morton had no greater passion, however, than family. He cherished his children and grandchildren and led by example. He was a man of great integrity and served as a humble and tireless role model to all who knew him. He set extremely high professional and personal standards for himself, which was modeled for his children and grandchildren every day of their lives. He lived by the four “Ds”—Discipline, Desire, Determination and Dedication—but those important words are insufficient to describe him. He was smart, hard working, compassionate, loyal and had a great (and sometimes wicked) sense of humor. Morton will be sorely missed by all of his surviving friends and family, including his wife Susie; his children and grandchildren, son Robert and Sharon Krumholz, and their children, Lauren and Danny Marom, Michael and Lindsay Krumholz, and Leah Krumholz, daughter Julie and Clay McPhail, and Julie’s children, Mandy and Adam Miller, Amy Klearman and Abby Klearman, son Richard and Karen Krumholz, and Richard’s children, Grant, Braden and Carson Krumholz, Jon and Regan Kasman, and their children, Sydney and Zoe, Beverly and Robb Roth, and their children, Jake and Emma, and Kenny and Jayme Kasman, and their children, Samuel and Truman, together with all of Morton’s growing number of great grandchildren. He also leaves behind caring brother-in-laws and sister-in-laws, Judy and Haskell Rosenthal and Steve and Cheryl Golub. He also leaves multitudes of cousins, nieces, nephews colleagues and friends. The family would like to give heartfelt thanks to the wonderful caregivers, most recently, Janie, David, Hannah, Deysi and Albina. The family also thanks Dr. Michael Pellegrini for his consistent, personal care for Morton through the years. In lieu of flowers, memorials may be made to Temple Beth Shalom or the charity of your choice. Obituary will be printed in the Sunday, August 9th edition of the Austin American Statesman.

Krumholz, Morton Lang With the passing of Morton L. Krumholz, we lose a selfless servant to our community and the patriarch of his close and loving family. Morton was born on April 17, 1933. He graduated from John Tyler High School, received... View Obituary & Service Information

The family of Dr. Morton Lang Krumholz created this Life Tributes page to make it easy to share your memories.

With the passing of Morton L. Krumholz,...