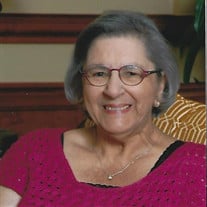 Miriam (Feibusch) Kohn | 1936-2019 Miriam Kohn passed away in her home on May 23. She was 83 and lived a full life, filled with spirituality, service to those in need, and the love of family and friends. Born Miriam Feibusch in Berlin in 1936, she was forced to flee Nazi Germany at a young age. The Feibusch family was interned in the Isle of Man in England during the War before emigrating to San Francisco, where Miriam spent her formative years. After graduating from San Francisco State University, she met Ted Kohn on a blind date. It was a quick courtship and they married on Christmas Day in 1960. Two years later, Miriam had obtained a masters’ degree in social work from San Francisco State when the Kohns made a dramatic move, leaving their cosmopolitan city life for Borger, Texas, a speck of a town in the Texas Panhandle. In Borger, they maintained their progressive ideals, becoming active in the Democratic Party and the nascent local civil rights movement. The Kohns had two boys in Texas, Rodger and Michael, before they moved to Baton Rouge, where they had their third child, Jennifer. They raised three successful, loving children in Baton Rouge and developed close ties to the community. Miriam was active in the local synagogue, volunteered with the developmentally disabled at the Mohican School, was area director of the American Cancer Society, and always heavily involved in her kids’ activities. She was also the resident expert in challah making, baking loaves for holidays and milestone events for much of the Jewish community. After the kids were out of the house and in college, the Kohns started another chapter of their lives together in Blacksburg, Virginia so that Ted could take a job at Virginia Tech. They spent many, happy years in Blacksburg. Miriam continued to serve those in need, providing support to seniors throughout the New River Valley – a job that required her to travel extensively to back-roads locations to serve her often-isolated clientele. Miriam’s legacy will live on through the lives of her children and grandchildren. The lessons of equality and social justice will live on through the lessons she passed to them. Miriam is survived by Rodger Kohn, his wife Marlana and their two children Willem and Georgia (Seattle); Michael Kohn (New Orleans); Jennifer Koppel, her husband Nathan, and their three children, Max, Asher and Aliza (Austin). In lieu of flowers, the family welcomes a contribution to a charity of your choice or the United States Holocaust Memorial Museum.

Miriam (Feibusch) Kohn | 1936-2019 Miriam Kohn passed away in her home on May 23. She was 83 and lived a full life, filled with spirituality, service to those in need, and the love of family and friends. Born Miriam Feibusch in Berlin in... View Obituary & Service Information

The family of Miriam Feibusch Kohn created this Life Tributes page to make it easy to share your memories.