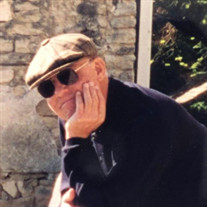 Michael Rotman, M.D. died at home on March 3, 2021 after a long and courageous battle with leukemia. Cancer may have taken him, but cancer did not win. Those twenty years of cancer-precipitated early-retirement afforded him luxurious time with his grandkids, with his volunteer clinic practice and time for mentoring of the young healthcare workers; time that had been unimaginable in the years he was building a busy medical practice. Mike Rotman, M.D. was one of the founders of the Heart Hospital in Austin. He was a pioneer in proactive health systems; that is, he had his patients keep health journals and use innovative home monitoring systems before this was common. He was also a New York City marathon runner. Mike Rotman did those things, but he also founded Poppy’s Camp for his grandkids with custom logo t-shirts, along with all the requisite summer camp activities. He taught the kids where their food came from with his gardening. Each year he would dedicate one vegetable to each child. Like the best of creative grandfathers, he even would hide arrowheads for the kids to uncover as archeologists. Mike Rotman was an accomplished professional and as profoundly an engaged grandfather. He discovered that the gift to him of Poppy’s Camp was how the children opened new worlds for him. Mike was born May 16, 1941, in Quito Ecuador to Jewish Immigrant parents who had separately fled Eastern Europe. His father Joseph, left Yedinetz and his family at the age of 18, to join his brother Hy in Paris. Mike’s mother Ella Zelig had emigrated to Ecuador with her family. That is where they met and married. The family moved first to New York City and then, for better work prospects, to San Antonio, when Mike was ten and his sister Diana was seven. Their little brother Sam was the one child born here in the US. Mike in his teens, helped his parents practice for their naturalization test. Henry B. Gonzales was the speaker at their naturalization ceremony. As Mike wrote in the family history he compiled, Congressman Gonzales concluded his remarks by saying: “America will always be a gathering place for souls that have wandered and thirst for freedom.” When asked to self-identify Mike would say “I am a Jew and an American;” both informed his sense of duty. Mike attended UT Austin after graduating from Jefferson High in San Antonio where he had played violin in the San Antonio Youth Symphony and met his long-time, dear friend Joe Westheimer. At UT they both joined Sigma Alpha Mu where Mike waited tables to work his way through college. He was in Plan II, and in his fourth year of college was admitted to UT medical school in Galveston. He was the first medical student from his program to do his Internship and Residency at Duke University. Mike and his first wife Joan Bettin had their two children David and Debbie while he was at Duke. He worked there in the heart catheterization lab. The family went from Durham, North Carolina to San Antonio Texas to fulfill Mike’s two-year commitment in the United States Air Force School of Aerospace Medicine. Subsequently they moved to Austin where he began his private practice with the Austin Diagnostic Clinic. They divorced in Austin. It was in Austin that Mike met, and in April 1978, married Sandy who had two sons of her own; making them quickly a family of six. There was a brief adventure out of Austin to practice in Charlotte North Carolina. When they returned Mike founded Central Texas Cardiology and eventually merged with Austin Heart and was part of the group that founded the Heart Hospital of Austin. Besides his love of family, music, running and gardening, Mike loved skiing, hiking, fly-fishing, reading, theater, and museums. After the kids left home Sandy and Mike had wonderful travel together. With their dear friends Carol and Doug Kadison, they travelled to Paris and Provence and Costa Rico. Mike and Tim Lowry took great fly-fishing trips together including to Alaska. Sandy and her dear friend Kathy Sangster were along when Tim and Mike fly-fished in Montana, where great fun was had by all. Mike was diagnosed with cancer twenty years ago and retired from his practice when he was 60. He served as a volunteer physician right up until last year only stopping when his health prevented it. Mike’s retirement has been a time of being present to life not shut-off by his illness. He is survived by his dog Nicholas, wife Sandy, children Michael Harris (wife Kari), David Rotman (wife Andrea), Chris Harris (friend Jamie) and Debbie Rotman Dauber (husband Kenny). Nine grandchildren, his siblings and their families and many dear friends, and his wonderful former patients. Private services were conducted on March 5, 2021 by Rabbis Blumofe and Freedman. Memorial contributions can be made to: Volunteer Healthcare Clinic https://volunteer-healthcare-clinic.networkforgood.com/projects/75788-general-giving-page Hebrew Free Loans of Austin https://hebrewfreeloanofaustin.org/donate/ Or Jewish Family Services https://shalomaustin.org/ways/ As the famous Jewish saying goes: “Be a Blessing.” As Mike used to say: “Just be kind.”

Michael Rotman, M.D. died at home on March 3, 2021 after a long and courageous battle with leukemia. Cancer may have taken him, but cancer did not win. Those twenty years of cancer-precipitated early-retirement afforded him luxurious time with... View Obituary & Service Information

The family of Michael Rotman created this Life Tributes page to make it easy to share your memories.