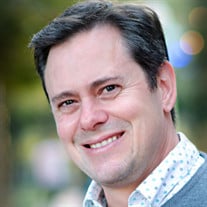 Martin Racine, 45, of Austin, died at home suddenly on September 23, 2018 of an aneurysm. Martin was born on April 11, 1973 in Montreal, Canada. He was raised in Laval, Quebec where he spent a happy childhood collecting baseball cards, watching sports with his father, reading comic books, playing with Lego, and snow skiing (of course). After graduating from the Université Laval in Quebec, Martin moved to Carbondale, Illinois and took a job as a physical therapist at a nursing and rehabilitation center. It was there that he met a nurse, Elizabeth Nudd, and was so impressed with the way she had wrapped a patient’s amputation stump that he asked her out with his new English, saying, “Would you like to go have a drink with me sometimes?” Actually, the plural of sometime turned out to be accurate. They continued going out and married a couple of years later. During this period Martin received his Doctor of Chiropractic degree from National University of Health Science in the Chicago area. Their daughter Audrey was born in 2004 and shortly after the family moved to Austin. In 2007, son Jack came along. Martin began working as a physical therapist at Seton Medical Center, where he served thousands of patients over the last thirteen years. Martin was so funny and so compassionate. He was a wonderful listener and an incredible friend. He personified love. He loved so deeply. He loved his wife deeply, his children, his mother, his sister, his extended family, his friends, his patients. He loved his life. He loved to cook. He loved to eat delicious foods, especially mussels, cheeses, and anything unusual. He loved wine. He loved to travel. He even loved yardwork (seriously). His survivors include his beautiful, beloved wife Elizabeth Nudd Racine, daughter Audrey Catherine Racine, son Jack Michael Racine, mother Thérèse Brouillard, sister Chantal Racine Morrisson (Steven), Mother and Father in-law Eileen and Mike Nudd, brothers-in-law Greg (Lenore), Chris, and Drew (Jackie), and many nieces and nephews. He was pre-deceased by his father André Racine. Martin also leaves behind countless friends from his Seton Family, his Mueller neighborhood, Canada, and Illinois. A Celebration of Martin’s Life will be held Tuesday, October 2, 2018 at noon at Tiny T Ranch, 3409 Caldwell Lane, Garfield, TX 78617. In lieu of flowers donations in Martin’s honor for his children may be made at LoveForMartin.com or to the Canadian Cancer Society (http://www.cancer.ca) in memory of his father.

Martin Racine, 45, of Austin, died at home suddenly on September 23, 2018 of an aneurysm. Martin was born on April 11, 1973 in Montreal, Canada. He was raised in Laval, Quebec where he spent a happy childhood collecting baseball cards, watching... View Obituary & Service Information

The family of Martin Racine created this Life Tributes page to make it easy to share your memories.

Martin Racine, 45, of Austin, died at home suddenly on September...