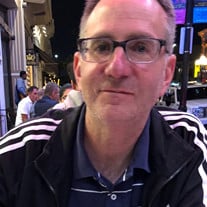 It is with great sadness that we share the passing of Martin Brian Levinson after a year-long battle with cancer. He fought hard to the very end. He was the definition of “positivity” throughout this difficult time. Our hearts are forever broken and his absence from this world will be forever noticed. Marty was born February 27, 1965, to Dr. Jerry Levinson and Florence Goldstein Levinson and was raised in Corpus Christi, Texas. He left us too soon at age 54 on February 12, 2020. He was a devoted husband, father, son, brother, grandson, uncle, nephew, cousin and treasured friend to all. Marty graduated from King High School in Corpus Christi where he was in the National Honor Society, Royal Court of Honor and an All-District point guard for the Mustangs basketball team. Marty graduated from the University of Texas at Austin where he was an active member of the Silver Spurs service organization as well as an active member and advisor of Sigma Alpha Mu for over twenty years. Marty worked for Sysco Food Service for the last 25 years as a sales representative and enjoyed servicing and interacting with the same group of loyal customers. Marty truly enjoyed working with the Sysco employees both inside and outside the warehouse and truly enjoyed the “close-knit” Sysco family. While employed with Sysco, Marty won several prestigious awards including the Ring of Excellence and the Torchbearer awards. We are extremely appreciative of their support during this past year. Marty was a true blessing and would light up any room with his smile. People gravitated to him everywhere and he truly never met a stranger. He had amazingly close, supportive and loving friends and family. He excelled at everything he did and was always giving of himself to others. He was loved, admired and respected by so many in our community and everyone would say it was a privilege to know him and a joy to be in his presence. Everyone knew that Marty’s true passion was coaching boys’ basketball. He taught teamwork, hard work and dedication to his boys both on and off the court. Marty coached through Town & Country Optimist Club and select basketball teams. He also coached and traveled with the JCC Maccabi teams for several years. Marty volunteered on the JCC Board for several years. Marty is preceded in death by his father Jerry Levinson with whom he had a special bond, and father in law, Richard Wells. He is survived by his wife of 30 years, Laura Wells Levinson, his two children, Courtney Michelle Levinson, and Corey Richard Levinson. He is also survived by his mother Florence Levinson, mother-in-law Marion Wells, brother Barry Ronald Levinson, sister Ilene Rene Levinson, sister-in-laws Mindy Levinson and Shelley Rotko as well as nephews Brandon Levinson, Brett Levinson, Hayden Rotko and Hudson Rotko. Memorial Services will be held on Sunday, February 16th, at 11:00 am at Temple Beth Shalom 7300 Hart Lane, Austin, TX 78731. In honor of Marty and his passion for the University of Texas, we encourage you to dress casual in your “burnt orange and white”. In lieu of flowers, donations may be made to the American Cancer Society, Hospice Austin or to the charity of your choice.

It is with great sadness that we share the passing of Martin Brian Levinson after a year-long battle with cancer. He fought hard to the very end. He was the definition of &#8220;positivity&#8221; throughout this difficult time. Our hearts are... View Obituary & Service Information

The family of Martin Brian Levinson created this Life Tributes page to make it easy to share your memories.

It is with great sadness that we share the passing of Martin...