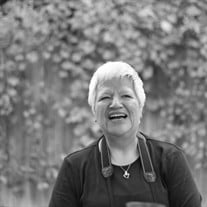 Lupe Mandujano Garcia died on Tuesday, December 15, 2020. Born in Tacambaro, Michoacán Mexico, Lupe grew up in Amarillo, TX with her sister, Coco, and parents Irene Rauda and Encarnacion Mandujano (or as everyone called him– “Don Chon”). Lupe earned a bachelor’s and master’s degree in Romance Languages from Texas Tech University in Lubbock, TX. While living in Lubbock, she was introduced to Frank Garcia by a mutual friend. They were married in San Antonio, TX on September 20, 1975. After being stationed at Logan AFB in Ogden, UT, Frank was later sent to Bergstrom air force base in Austin, TX in the summer of 1977. They made Austin their home and had two daughters, Gloria and Mim. Lupe was generous with her heart, time, and talents. There was always room for another chair at the table for dinner, and if there was a need in her community, she was there to fill it. She was a devoted mother. When her six-year-old daughter demanded she be her Girl Scout Troop leader, Lupe negotiated a three-quarter time work schedule to allow her to lead Girl Scout Troop 636. Lupe and Frank together were presidents of the Austin High Orchestra Parents Association and supported their daughters as boosters, fundraisers, and chaperones on orchestra trips. Lupe made her career in social services and public health. From working in San Antonio with the local health department, to helping low-income new mothers obtain services and resources they needed, to her work with the Texas state health department in vaccine advocacy, Lupe was committed to improving the health and wellbeing of her community. Following her retirement from the Texas Department of State Health Services, Lupe and Frank fulfilled their dream of traveling the world together. Lupe is preceded in death by her husband Frank, her mother and father. She is survived by her sister, Secorro “Coco” Medina, her daughters Gloria Litt and Mimi Garcia, sons-in-law Andrew Litt and Ken Cameron, and her grandchildren Ben, Molly, Kathryn, and Jonathan. A memorial service will be live-streamed via Congregation Beth Israel’s YouTube channel on Wednesday, December 23 at 10 a.m. https://www.youtube.com/user/CBIATX Lupe will be buried with her husband Frank at Fort Sam Houston National Cemetery in a private ceremony on Thursday, December 31 In lieu of flowers, a donation may be made to Any Baby Can (https://anybabycan.org/donate/), or Congregation Beth Israel (https://www.bethisrael.org/payment.php) in Lupe’s honor or the charity of your choice.

Lupe Mandujano Garcia died on Tuesday, December 15, 2020. Born in Tacambaro, Michoacán Mexico, Lupe grew up in Amarillo, TX with her sister, Coco, and parents Irene Rauda and Encarnacion Mandujano (or as everyone called him&#8211; &#8220;Don... View Obituary & Service Information

The family of Lupe Mandujano Garcia created this Life Tributes page to make it easy to share your memories.