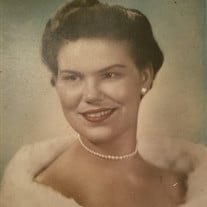 A special angel entered into heaven on August 19, 2020 when Lucille Grossman succumbed to COVID-19 after a courageous and hard fought battle. She was 81 years young and loved by all that knew her. She was known to be very independent, strong, stoic, compassionate, and loving. Lucille was born May 25, 1939 in Roe, Arkansas to her parents, Myrtle Lee Osborn and Allen James Cupples. She was one of nine children. The family moved to Newton, Iowa where she spent her formative years and learned the value of a dollar at an early age. She worked as a waitress to help support the family until she graduated from Newton Senior High School. She moved to Hollywood, California in 1957 where her first daughter, Monique was born on December 31 1960, and her second daughter, Therese Renee (“Teri”), was born on May 18, 1962. She moved from Hollywood to Chicago later in 1962 where she raised her two girls while working as an executive secretary. To supplement her income, she also worked part-time as executive assistant to the Chief Surgeon of the Chicago Police Department, Dr. James Carroll, whom remained a lifelong friend until he passed away in 1997. It was in Chicago that she met the love of her life, Robert “Bobby” Grossman. Lucille was a very spiritual person and made the decision to convert to Judaism before they married in 1968. Bobby then adopted Monique and Teri. Together they had a son, Victor Grossman, born on August 13, 1970. The family lived on Chicago’s north side from 1968 to 1986 when they moved to Deerfield, Illinois. Beginning in 1979 Lucille proudly worked as a Cook County Deputy Sheriff for the next 21 years. Bobby and Lucille lived their remaining years happily together in Deerfield until Bobby passed away in June 2002. Lucille remained in Deerfield until moving to Round Rock, Texas in 2013 to live her remaining years close to her daughter, Monique, and her grandchildren. Teri then joined the family and also moved to Texas in 2015. It is devastating to have lost Lucille due to the ravages of the COVID-19 virus. However there are many beautiful memories of her that the family would like to share with everyone. Lucille was a breast cancer survivor. She was a Words with Friends Champion and master at the game of Dominos. She was a ferocious reader and loved a good thriller novel. She taught her grandchildren, Allison and Richard, the joy of museums, libraries, high quality shopping and the GOOD chocolate from Fannie May. She made the best beer brisket and potato pancakes that you will ever taste. Her favorite drink was “Ken’s secret recipe” Bloody Mary made by her son-in-law, so heaven better have a good one waiting for her today. She loved Big Eyes (Walter Keane) and Picasso paintings. She enjoyed the view of the beautiful birds and flowers from the window in her room at Park Place Care Center in Georgetown, Texas where she resided from 2014 until passing. Her favorites were the red cardinals and the red roses because she said they reminded her of Bobby. During her time at Park Place she ran the Bingo Parlor with her daughter Teri, she was Vice President of the Park Place Resident Counsel and this past April campaigned and swept the election to become President. The entire family endearingly referred to her as “Madame President” from that point forward. Lucille was very proud that she was a woman living in the state of Texas with the title of president and a Democrat on top of that! Lucille is survived by her children Monique Butz (Kenneth), Therese Grossman (late Robert Judson), and Victor Grossman (Katie); grandchildren Allison DeWitt (Lance), Richard Butz (Deana), great-grandchildren Kylee, Braysen and Samuel, and sisters Ruth Osborn, Kay Lepley and Susie Munger. She is preceded in death by her husband Robert Grossman, parents Allen and Myrtle Cupples, and her siblings Gene Cupples, Pearl Umbarger, Allene Nelson, Shirley Crabtree, and Allen Cupples Junior. Lucille will be laid to rest at Westlawn Cemetery in Norridge, Illinois. Here is a link to the service https://portal.midweststreams.com/services/list/Lakeshore%20Jewish%20Funerals Donations in Lucille's memory may be made to the Breast Cancer Resource Center of Round Rock, MD Anderson Cancer Center or Meals on Wheels.

A special angel entered into heaven on August 19, 2020 when Lucille Grossman succumbed to COVID-19 after a courageous and hard fought battle. She was 81 years young and loved by all that knew her. She was known to be very independent, strong,... View Obituary & Service Information

The family of Lucille Grossman created this Life Tributes page to make it easy to share your memories.

A special angel entered into heaven on August 19, 2020 when Lucille...