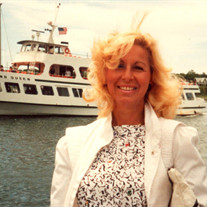 Lovely Lorraine Frank, at 84 years of age, born and raised in Brooklyn NY, passed away on April 1st, 2021. She passed comfortably in her sleep from complications arising from dementia. Born Lorraine Kolomer in 1936, towards the end of the great... View Obituary & Service Information

The family of Lorraine Frank created this Life Tributes page to make it easy to share your memories.

Lovely Lorraine Frank, at 84 years of age, born and raised in...