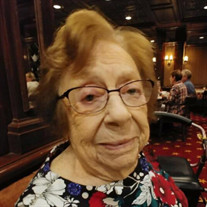 Ladye Barnard Carpenter was born on November 23, 1920 to Harry Gordon Carpenter and Annie Watson Barnard in Rolling Fork, Mississippi. She was named after an aunt who had a winning personality and pure gentle influence. She was 20 months old when her sister was born. While trying to say “My Little Baby,” she said “My Little Bebe,” which became her sister’s nickname. Her life philosophy was “Ain’t Misbehaving, Just Having Fun.” As an example, she convinced a friend in her Sunday white dress to go for boat ride. When Ladye got to the middle of the creek, she sank the boat. She attended Belhaven College in Jackson, Mississippi, and University of North Carolina at Chapel Hill. After graduation, she worked for the FBI as a decoder of German messages. Her German professor loved hearing her speak German with her southern accent. Her minister in Washington DC was Peter Marshall, who preached that sermons should last no longer than 20 minutes. Ladye believed in this philosophy for all her adult life. She even pushed a real stop sign, which had been fitted with wheels, into the aisle of a Southern Baptist Church to let the minister know when his sermon was longer than 20 minutes. She moved to Baton Rouge, Louisiana where she met Walter Freitag while she was working for Standard Oil of Louisiana (later Exxon). They were married on June 25, 1949. Her father was a dairyman and one of the cows got loose and attended her outside wedding reception. In January 1953, they moved to Louisville, Kentucky. While in Louisville, Ladye taught Sunday School, held several jobs in Garden Club, delivered Meals on Wheels and led a Brownie troop. After her husband died in 1985, she returned to Rolling Fork. She has served as regent, secretary, and program chairperson of the Daughters of the American Revolution; director of the young adults Sunday School department; and chair of several cancer drives in her community. For many years, she traveled on about 20 trips a year, including trips to foreign countries. Her favorite trip was an African Safari. In 2016, she moved to the Georgetown, Texas area to be near her kids. She enjoyed all the restaurants in both Georgetown and Austin. Her son loved to have theme parties, which she was invited to. He had an ugly shirt party, and attendees voted who had the best “ugly” shirt. Her blouse had multiple pom-poms on the front. When she won, she stood up and shook her pom-poms, which became her signature move at her retirement communities. She died September 21, 2020, about 2 months shy of her 100th birthday. As with her namesake, “at the golden portal, she will greet us one by one.” She is survived by her daughter, Ladye Harriet, and her son, Walter. In lieu of flowers, please contribute to religious or charitable organizations of your choice.

Ladye Barnard Carpenter was born on November 23, 1920 to Harry Gordon Carpenter and Annie Watson Barnard in Rolling Fork, Mississippi. She was named after an aunt who had a winning personality and pure gentle influence. She was 20 months old... View Obituary & Service Information

The family of Ladye Barnard Freitag created this Life Tributes page to make it easy to share your memories.