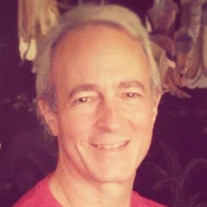 Kenneth Jay Greenberg, 57, passed away on May 22, after a brave fight with cancer. He was born on February 22, 1961, in Oklahoma City, Oklahoma to Maynard and Miriam Greenberg. Ken grew up in Oklahoma City, and he graduated with a business degree from Oklahoma State University. After college, he moved to Austin, Texas, where he has lived until now. Ken was very creative and artistic. He also had a keen sense of humor. Ken was a loyal and trusted friend to all, and a stranger to no one. He had more friends than can be counted. Ken's wit and loyalty to his family and friends were a treasure that will live on. Ken lived life to the fullest, and he was a true Austinite. Ken was a big music fan, and he attended local music clubs and concerts. He also was a film buff, and he enjoyed going to movies often with his daughter. Ken and his girlfriend loved traveling together, both in the United States and abroad. He enjoyed smoking cigars with friends at their “Ash Wednesday” cigar club on many Wednesday evenings, and boating frequently with friends on Lake Austin. He is survived by: his daughter, Natalie Greenberg; his father Maynard Greenberg; his sister, Sherri Greenberg and brother-in-law, Cary Ferchill; his girlfriend, Faviola Farias; his nephew, Jordan Ferchill and fiancé, Katherine Duong; his nephew, Price Ferchill and wife Hillary Chaffin. Funeral services will be at Congregation Beth Israel at 3901 Shoal Creek Blvd, Austin, TX on Friday, May 25, at 11:00 am, with burial and graveside service immediately following at Capital Memorial Park Cemetery, at 14501 N. IH-35. Donations may be made to the Neuroendocrine Tumor Research Foundation. To share condolences with the family, please visit the online guest book at Austin Natural Funerals AustinNaturalFunerals.com

Kenneth Jay Greenberg, 57, passed away on May 22, after a brave fight with cancer. He was born on February 22, 1961, in Oklahoma City, Oklahoma to Maynard and Miriam Greenberg. Ken grew up in Oklahoma City, and he graduated with a business degree... View Obituary & Service Information

The family of Kenneth Jay Greenberg created this Life Tributes page to make it easy to share your memories.