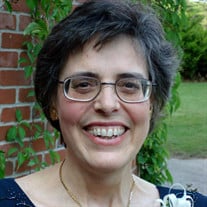 Karen Jean Ophir, teacher, sonographer, conference coordinator, and beloved wife, mother, and grandmother passed away peacefully in Ithaca NY on August 5, 2020. Karen was born in Kansas City, Missouri on July 6, 1949 to Marvin and Henriette Marcus. Her family in Kansas City included her parents, a sister Sandra, Uncles Milton and Joe and their wives Dee and Clara respectively. She grew up in Kansas City, Missouri until the age of 4, at which time her family moved to Cumberland, Maryland and then Cincinnati, Ohio. When she was 8 the family decided to start a retail women’s clothing store and returned to Prairie Village, Kansas, a suburb of Kansas City, Missouri. The store was family owned and operated and all family members, including Karen, worked there. She loved swimming, drawing, and painting. She was interested in all types of artistic media. She participated in summer theater at the Barn Players Theater where she had several parts, including Eleanor Apley in The Late George Apley. In her final year of High School at Shawnee Mission East, she met Jonathan Ophir on a blind date. In 1968, just a few years later, they were married, and they shared an endless love that lasted their lifetimes. Together they attended college at the University of Kansas, where she graduated with a degree in mathematics and teaching. In 1974, they had a son, Alex. In 1980, they left Kansas and moved to Houston, where Jonathan began working at the University of Texas Health Science Center. During this time, she held several jobs, including being a high school math teacher, a circuit board designer, a scientific graphic artist, an instructor of physics of ultrasound for medical school students, and a sonographer. It was her last job that became a passion and hobby. Together with Jonathan, she channeled much of her creative energy into developing the International Tissue Elasticity Conference (ITEC), a society dedicated to imaging tissue elasticity using ultrasound. For over a decade, she organized the ITEC conference, while serving as an unofficial mentor to many graduate students and postdocs, and developing lifelong friendships with many colleagues who specialized in the field of ultrasound. She was recognized for her excellence in both technique and service to this field by being awarded the Distinguished Sonographer award in 2008 by the American Institute of Ultrasound in Medicine. Karen and Jonathan spent nearly 20 happy years living in Austin TX, working, tending to their rose garden, and entertaining many friends and family from nearby and far away. In 2019, she moved to Ithaca NY to live just around the corner from her son and grandchildren. The close proximity and frequent visits with them made the cold winter tolerable, even for her. Karen had a love for traveling the world, but of all the places she had been, including Australia, South America, Europe, Asia, and of course North America, her favorite places to visit were Arches National Park, the Netherlands and Israel. In addition to traveling, Karen was passionate about visual art, her cats, and cooking. Her delicious dishes and meals were appreciated by family, friends, and colleagues worldwide. There was rarely a time she was not baking, making trademarked soups, or preparing one of the many other meals that she learned to cook from her grandmother-in-law Olga. Karen is survived by her loving family: her son and daughter-in-law Alex and Angela, and her three grandsons Marcus, Evan, and Cohen. A live stream of the inurnment and unveiling will appear on the Austin Natural Funerals Facebook page, https://www.facebook.com/AustinNaturalFunerals, shortly before 2 pm on Thursday, August 5th. A Facebook account is not required in order to watch. If a pop-up window appears asking you to log in click "not now" and the live stream will be available for you to watch. If the "not now" button does not appear, scroll down on the page and it will come up for you to select. If you wish, in lieu of flowers or other such things please consider making a small donation to any of the following charities: The American Cancer Society, MD Anderson Cancer Center, or Feeding America.

The family of Karen Jean Ophir created this Life Tributes page to make it easy to share your memories.