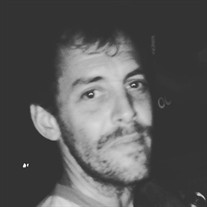 AUSTIN, TX -- Joshua Gordon Feldstein passed away peacefully on Friday, June 21, 2019 after a brave battle with Huntington's Disease. He was 41 years old. Josh was born on February 22, 1978 in Madison, New Jersey to his parents, Amy Jones and George Feldstein, and two sisters, Anne Kimberly and Sarah Feldstein Ewing. Josh spent his youth in New Jersey before attending Guilford College in Greensboro, NC where he earned a degree in Cultural Anthropology. His deep love for those close to him and a mischievous spirit led him into many adventures and capers throughout his life. While at Guilford, Josh spent a semester studying in Tanzania; after college, he taught English in South Korea for a summer. Josh’s travel bug took him all over the United States, as well, visiting friends and family on all coasts, and making homes for himself in Key West, FL, Colorado and Portland, OR before settling in Austin, TX. Notably, Josh spent several seasons working at the famed Stanley Hotel in Estes Park, CO. Once settled in Austin, Josh worked for a number of years at the Texas School for the Blind and Visually Impaired. Josh was goofy and loving, and popular with residents and staff alike. He also did a short stint as a door-to-door knife salesman and a few semesters of nursing school. Near the end of his life, he aspired to work with service dogs as he had discovered his gift for dog training. Despite the challenges of the disease, Josh was able to maintain a large network of close friendships, and find joy in day to day pleasures such as coffee, scratch tickets, and ice cream. He was incredibly clever and punny. He had a sharp wit and was adept at coining a phrase. He loved babies and bicycles, and occasionally had a mustache. Josh was preceded in death by his father, George. Josh is survived by his mother, Amy Jones of Portland, OR, sister Anne Kimberly and her son Nico, as well as his sister Sarah and her family, also of Portland. Josh is also survived by the loving network of his friends and their children (known as Team Josh) who cared for and supported him until his death, and who will miss him immensely. Josh is also survived by Bob Barker, his loyal service dog, who brought such joy and comfort to Josh’s life. His body will be laid to rest at 1:43pm on Friday, June 28th at Eloise Woods Natural Burial Ground with a Celebration of Life to follow. In lieu of flowers, please consider a donation to the Huntington's Disease Society of America. Please visit https://photos.app.goo.gl/FC641MDZ7uytZZrL6 for more photos of Josh.

AUSTIN, TX -- Joshua Gordon Feldstein passed away peacefully on Friday, June 21, 2019 after a brave battle with Huntington's Disease. He was 41 years old. Josh was born on February 22, 1978 in Madison, New Jersey to his parents, Amy Jones and... View Obituary & Service Information

The family of Joshua Gordon Feldstein created this Life Tributes page to make it easy to share your memories.