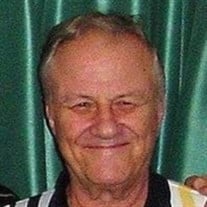 Joseph C. Sultanik, 90, passed away peacefully on Jan 20, 2022, in Austin, Texas. He was born November 23rd, 1931, in Buffalo, NY to Morris and Sadie Sultanik. He is survived by his wife Bonnie of 51 years, his four sons, and his sister. Joe lived a long and happy life. He was a veteran of the Marine Corps serving during the Korean War. He spent his early life in New York where he married Esther Kliman and had two sons Michael and Paul Sultanik. He joined the Department of Defense and earned a degree from the University of Maryland. He had a successful 36- year career with the government working in many diverse locations, including Greece, Germany, Texas and Hawaii. Sadly, his first wife passed away. He was able to find love again and remarried Bonnie Reist and added two more sons to the family, Bryan and Sam Sultanik. In 1989 he retired to Austin, Texas and worked as an Enrolled Agent for H&R block for the next 16 years. He retired again and spent his remaining years in Austin with his loving wife watching their family grow with the addition of grandkids and great grand kids. Joe was a caring, loving, devoted family man throughout his entire life. His greatest joys were family get-togethers during the Jewish holidays. He was a foodie at heart who loved a good ole corned-beef sandwich. He had a kind soul and chose to share his smile with the world. His patience and compassion in his later years are to be admired and learned from. He was content with his life and his many successes. His final message was don't let life worry you, enjoy it, remain calm and when problems arise remember these words "this too shall pass''. He is survived by his wife Bonnie, son Michael and wife Dinah with their two children and five grandchildren, son Paul and wife Gail, son Bryan and wife Mia with their three children and two children from his previous wife Annabelle, son Sam and wife Cindy and their two children, and his sister Mildred. He is preceded in death by his brother Samuel Sultanik and sisters Fannie Gotlieb and Clara Katz. In lieu of flowers, the family suggests donations in Joe's memory to: Congregation Agudas Achim: https://congregationagudasachim.shulcloud.com/form/give PKD Foundation: https://pkdcure.org/give/ The American Cancer Society: https://www.cancer.org/involved/donate.html

Joseph C. Sultanik, 90, passed away peacefully on Jan 20, 2022, in Austin, Texas. He was born November 23rd, 1931, in Buffalo, NY to Morris and Sadie Sultanik. He is survived by his wife Bonnie of 51 years, his four sons, and his sister. Joe... View Obituary & Service Information

The family of Joseph C. Sultanik created this Life Tributes page to make it easy to share your memories.