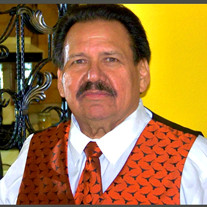 Born in Austin, Texas on July 23, 1947, Jesse Limon Colunga was a proud member of the Limon family, one of the largest Latino families in Texas. Amongst Jesse's highest honors, to which there are many; he served in the US army, achieving the rank of E-5 while stationed in Europe. He also attended the University of Texas and was a lifelong fan of the fighting Longhorns. Jesse dedicated his professional life to helping others, serving Travis County Health and Human Services. While Jesse leaves many good deeds in this world he leaves behind, not one was more encompassing than his role as a father to his beloved son, Aaron Jacob, who was the light of his life. Jesse was a mentor and coach to so many. He had "adopted" all of Aaron's friends, and his house was always a warm place for everyone. Jesse filled his home with delicious caldo, the Cowboys, The NY Yankees, and laughter. He was surrounded by the family he loved, including, but not limited to, Raymond Limon, Jim Limon, Sonny Fernandez, Martin Limon, Karlos Knox. His warmth extended to Aaron's friends who became family, including: Travis Willis, Max Varela, Christina Rivas, Jose Ramirez, Anthony Hood, Richard Rendon, and Lauren Klein. During his 26-year career with Travis County Human Services, Jesse introduced numerous programs that set the standards for a service delivery model for all rural community centers. He negotiated a City of Austin/Travis County agreement for the use of county vehicles to provide transportation services to the elderly and introduced a model Safety Seat Loaner Program for infants and toddlers. He successfully advocated for a congregate senior luncheon program, Meals on Wheels for homebound elderly, health services and served as a charter member of the Del Valle Optimist Club, which introduced Little League baseball to the youths in Del Valle. He coached Little League baseball teams for seven years, leading Del Valle teams to numerous area playoffs. Jesse served as President of the Southeast Travis County Volunteer Fire Department for 14 consecutive years, and successfully advocated the establishment of an Emergency Service District, a taxing entity allowing for the collection of funds to provide fire suppression equipment in the remote areas of the County. He served as President of the public employees union, AFSCME Local 1624 for eight consecutive 2-year terms. Upon his retirement from Travis County, Jesse worked for the City of Austin's Parks and Recreation Department, overseeing the Senior Transportation Program, its Congregate Meals Program, Meals on Wheels and the Summer Food Program, serving area youths at various playgrounds, recreation centers and apartment complexes. He continuously coordinated services linking urban and rural communities. Jesse served on the board of the City's Conley-Guerrero Senior Activity Center, as the Governor of the Austin Moose Lodge 1735, and was the active President of the statewide Texas Moose Association. This allowed Jesse to continue to advocate for persons in need of social services. Jesse was known for his 40 years of involvement in National fastpitch softball, where he earned his nickname "Power Pak" for his epic swing. He played softball like he lived his life; with the highest level of integrity. Jesse's prolific career was highlighted most recently when the Travis County Community Center in Del Valle was renamed "Jesse Limon Colunga" building. Preceded by his parents, Julia Limon Colunga and Jesse Ybarra Colunga, and his sister Tina Colunga and his most beloved son Aaron Jacob Colunga. He is survived by his two loving sisters, Petra Flores and Juanita Colunga Knox, as well as his best friend, Aaron's mother, Andrea Colunga Bussey. Andrea and Jesse shared a uniquely close friendship, and along with Art Bussey, they provided a strong foundation of love and support for their son. May Jesse's memory be a blessing! Services will be held Friday, February 18th at 11 o'clock at Cook-Walden Memorial Park, 14501 N. IH 35 in Pflugerville. A live stream of his funeral service will appear on the Austin Natural Funerals Facebook page, https://www.facebook.com/AustinNaturalFunerals, shortly before 11 am on Friday, February 18th. A Facebook account is not required in order to watch. If a pop-up window appears asking you to log in click "not now" and the live stream will be available for you to watch. If the "not now" button does not appear, scroll down on the page and it will come up for you to select. Sending flowers is not the Jewish custom, therefore in lieu of flowers, the family asks that donations be made to one of the many causes that Jesse held dear. Congregation Beth Israel in Austin The National Moose Heart and Moose Haven Considering Jesse's commitment to community wellness, we ask that all attendees wear a mask to the service. ***Immediately following the service, there will be a reception at the Moose Lodge, located at 2103 E.M. Franklin Avenue, Unit 1, Austin, Texas 78723. If anyone has any questions, please text or call (281)-546-3916.

Born in Austin, Texas on July 23, 1947, Jesse Limon Colunga was a proud member of the Limon family, one of the largest Latino families in Texas. Amongst Jesse's highest honors, to which there are many; he served in the US army, achieving the... View Obituary & Service Information

The family of Jesse Limon Colunga created this Life Tributes page to make it easy to share your memories.