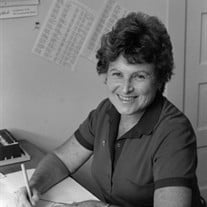 Jeanne Saletan died peacefully at home on Friday, Sept. 24, 2021, at age 93. She was born in Newark, New Jersey, and grew up in a community of Jewish immigrant families. While raising five children in New York and Texas, she embarked on a life of feminist activism and Jewish learning. She loved people and liked to try new things. Over the years, she trained as an electrician and machinist, learned drafting and filmmaking, sang in a community choir, performed in a play, served as a security guard at a women's conference, and went on a 400-mile motorcycle trip across Texas. Jeanne earned a bachelor's degree from the University of Wisconsin and a master's degree in social work from the University of California at Berkeley. In her early professional years, she taught kindergarten and helped women transition from public assistance to job training and employment. She worked with veterans, juvenile offenders, and the biological parents of children in foster care. In her 40s, inspired by Betty Friedan's book, The Feminine Mystique, Jeanne joined the feminist movement. She led discussion groups, campaigned for the Equal Rights Amendment, and launched a sex discrimination investigation that prompted her school district to begin hiring women in administrative roles. She served as president of the Houston area chapter of the Older Women's League, worked with the National Organization for Women and the National Council of Jewish Women, and helped form the Women's Lobby Alliance, a coalition of feminist organizations. She lobbied and testified before the Texas legislature, obtaining health insurance legislation for displaced homemakers and changing the way textbooks treated women and girls. She also worked as a vocational counselor for women. In later years, Jeanne studied Hebrew and explored Jewish thought, particularly through the works of Rachel Adler, Mordecai Kaplan, Arthur Green, Abraham Joshua Heschel, and Yehuda Amichai. She co-founded and served as the first president of the Houston Reconstructionist Havurah. In 1992, at age 63, she became a bat mitzvah. She participated in Palestinian-Jewish dialogues, hosted a weekly discussion group on religious writings, and became a devoted member of Congregation Shma Koleinu. She continued to work in her community, tutoring adults in English and fighting successfully for housing for single mothers. She loved to sit in her back yard and watch the squirrels. Toward the end of her life, Jeanne lost several beloved family members: her husband David Saletan, her son Ira Saletan, and her brothers Harry and Lewis Barnett. She is survived by her children Paul, Becky, Will, and Lou; by her daughters-in-law Suzanne Shiff, Tam Voynick, Martha Hirschfield, and Jynne Dilling; by her son-in-law Marshall Messer; and by her grandchildren Amelia Saletan, Ben Voynick, Anna and Simone Messer, and Eli and Miriam Saletan. The family would like to thank her doctor, Theresa Vicroy; her rabbi, Scott Hausman-Weiss; and her caregivers, Hattie Johnson, Martha Smith, Karen Finley, Stephanie Rogers, and Stephanie Booker. A small, private graveside ceremony was held on Sept. 26 at the Eloise Woods Natural Burial Park in Cedar Creek, Texas, under the auspices of Austin Natural Funerals. A memorial service will be held at a later date. Donations may be made in Jeanne's memory to Congregation Shma Koleinu, Jewish Family Service, or a charity of your choice.

Jeanne Saletan died peacefully at home on Friday, Sept. 24, 2021, at age 93. She was born in Newark, New Jersey, and grew up in a community of Jewish immigrant families. While raising five children in New York and Texas, she embarked on a life... View Obituary & Service Information

The family of Jeanne Barnett Saletan created this Life Tributes page to make it easy to share your memories.