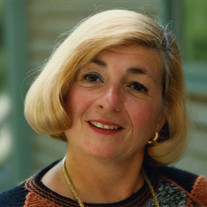 Janice Lee Rosenberg Becker was born December 13, 1933, in Lynn, Mass. and passed away on January 15, 2020, in Austin, Texas. She was preceded in death by her parents and by both of her siblings, Marilyn Grosberg and Jerry Rosenberg. Janice was the second child of Jacob (Jack Ross) and Frances Rosenberg. Janice was a child of the depression. She attended Brookline High School in Brookline, Mass and later Boston University where she majored in education. During her junior year at Boston University she was introduced to Stanley Becker through mutual friends. They had a first date at Walden pond in Concord, Mass. and they soon were deeply in love. They married on September 5, 1955. Janice taught school in Watertown, Mass. and was soon pregnant with their first child. Their first child, Scott, was born in July 1957 followed by Steven in 1960. Janice retired from teaching to raise their family and they bought their first home in Sharon, Mass. The Beckers lived in Sharon for 9 years and relocated to Framingham, Mass. where the children attended the Framingham schools. During those years Jan was active in the Framingham Head Start program in the Framingham school system. During the first portion of their marriage, Stan worked as a salesman for a national chemical company. It was during those years, in celebration of Scott’s bar mitzvah, that the family embarked on a 6 week RV tour of the United States. The Beckers traveled to a number of national parks, to Disneyland and visited a number of Stan’s college friends in the Southwest. After returning from that trip they began parking their RV at sites in Maine and New Hampshire as a vacation home. That eventually developed into the purchase of a condominium in Bridgton, Maine which became their summer residence. It was during that time that Stan and Jan bought Brickman’s, a decorative hardware business, from Stan’s uncle. They relocated the business to Waltham, Mass. and worked side by side to make Brickman’s one of the preeminent dealers of decorative hardware and bathroom fixtures in New England. Stan would often state that Jan essentially ran Brickman’s and was the major factor in their business’ success. After their retirement, the Beckers sold their home in Framingham and purchased a home in Austin, Texas where Scott had relocated, to be near their grandchildren. Janice spent many happy years living near her family in Austin during the winters and migrating to Bridgton for the summer. An added bonus was her 2 granddaughters attending summer camp near their home in Maine. Janice enjoyed traveling, reading, and summers in Maine but she was most proud of her family. She is survived by her husband of 64 years, Stan Becker, her two sons, Scott Becker and Steven Becker and their wives Rehana Becker and Sherri Allen. She also leaves her granddaughters, Sarah Becker and Lauren Becker, and Lauren’s husband Andy Gonzalez-Bendiksen, as well as her step-grandsons, Feroz James and Farhan James. Janice was a devoted wife, mother, and grandmother and was very much loved by her family and by her friends. She will be greatly missed. The family requests that donations in Janice’s name be sent to the Alzheimers foundation at alzfdn.org.

Janice Lee Rosenberg Becker was born December 13, 1933, in Lynn, Mass. and passed away on January 15, 2020, in Austin, Texas. She was preceded in death by her parents and by both of her siblings, Marilyn Grosberg and Jerry Rosenberg. Janice... View Obituary & Service Information

The family of Janice Lee Becker created this Life Tributes page to make it easy to share your memories.