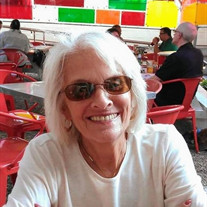 Janet S. Bergman, 76, March 20, 1945 - December 25, 2021, daughter of Murray and Sylvia Simon. Formerly of Easton, Pennsylvania and New Smyrna Beach, Florida. She also lived briefly in Cleveland, Ohio and Austin, Texas. After graduating from Temple University, she and former husband of 28 years Sidney Bergman raised their daughters Allison and Hillary in Easton, PA. She followed her dream to open an antiques shop by moving to Jim Thorpe, PA. While there, she connected with Michael Noel, who would become her partner of 20 years. Warmer weather called, and she moved to New Smyrna Beach, where she purchased an historic building that she renovated into multiple retail, office and living spaces. In this building she first had an antique store and then a shoe and accessory store. When she retired, she rescued a dog named Lady, who proved to be a wonderful companion and brought lots of joy to Janet. When Janet's health declined, she moved closer to Allison in Cleveland, and then to Austin to be near Hillary. Hillary organized Janet's care, ultimately having Lucy Lasso be her primary caregiver. Lucy not only cared for Janet- she also became a friend. Janet was creative, organized, smart, chic and irreverent. She will be remembered for her humor, her beauty, and her stubbornness. She will be missed by her daughters, Rabbi Allison Vann (Charlie), and Hillary Bergman (Lee Perry); and her grandson, Isaac Vann. Janet was predeceased by her longtime partner, Michael Noel. A private memorial will be held. Donations in memory of Janet may be made to Suburban Temple-Kol Ami, https://www.suburbantemple.org/

The family of Janet S. Bergman created this Life Tributes page to make it easy to share your memories.