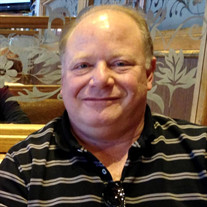 James Ingall Vine passed away peacefully in his sleep on January 1, 2022 after a brief illness. He was born in Houston, Texas on January 10, 1958 to Dr. Bernard Vine and Ruth Ingall Vine. After attending Memorial High School, he graduated from Texas A&M with a degree in industrial technology, then returned to Houston to pursue a career in engineering. A few years later, the mountains called to him and he joined a friend in Colorado. He continued in engineering for a time before moving into recruiting, first in the technology industry, and more recently in nursing education. Finding candidates for the perfect positions gave him great joy. James met Donna Downey in 1998 and they made an instant connection. They were married in Denver in November 1999, and he was happy to have a family with Donna and her two children. They made their home in Littleton, Colorado. James had a great sense of humor; he loved telling jokes, making puns, and wisecracking while watching tv shows and movies (particularly funny ones, like Monty Python). He also loved history, with a keen interest in World War II. More than all these was his overwhelming love of music, his favorite genres being jazz and progressive rock. He taught himself guitar and keyboards, and jammed with his friends whenever he could. He was even known to write songs that he would then play for anyone who wanted to listen. His spirituality compelled him to learn about other people’s religions and philosophies. Even when he didn’t agree with them, he respected other opinions. Getting together with friends and discussing their beliefs, drinking good scotch, and immersing himself in nature were some of his favorite ways of spending his time. He loved all animals, but especially the many dogs he had over the years; he loved his family, nature, and time with friends. James was predeceased by his parents. He is survived by his wife, Donna Vine, and her parents, David and Patricia Nester; his children Haley Orsborne and Christopher Orsborne, Jr.; his granddaughter Maxine Hopkins; his sister and brother-in-law, Jackie and Larry Sklar, and their children, Brian and Lauren Sklar and Alexandra Sklar, and great-nephews Trent and Emmett; his sister and brother-in-law, Andrea Vine and Richard Jenkins, and their daughter, Lauren Vine; and numerous friends whom he considered family. Because of his love of animals, those who wish to may donate in his memory to Dumb Friends League of Denver, or Rescued Pets Movement of Houston. There are stars up above, so far away we only see their light long, long after the star itself is gone. And so it is with people that we loved – their memories keep shining ever brightly though their time with us is done. But the stars that light up the darkest night, these are the lights that guide us. As we live our days, these are the ways we remember.

James Ingall Vine passed away peacefully in his sleep on January 1, 2022 after a brief illness. He was born in Houston, Texas on January 10, 1958 to Dr. Bernard Vine and Ruth Ingall Vine. After attending Memorial High School, he graduated... View Obituary & Service Information

The family of James Ingall Vine created this Life Tributes page to make it easy to share your memories.

James Ingall Vine passed away peacefully in his sleep on January...