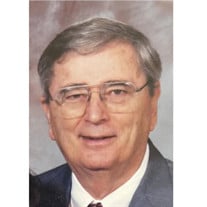 James Paul Mikulak peacefully passed away on Thursday, February 3, 2022, at Brookdale Westlake Hills Assisted Living in Austin, Texas at the age of 87. Born on September 1, 1934 in Toledo, Ohio, Jim was the elder of two children of Polish immigrants, John Mikulak and Mary Blaszyczyk Mikulak. Jim was raised in Toledo, Ohio with his sister, Camille Mikulak Staczek (John Joseph Staczek). As the center on Toledo's Macomber High School all-state basketball team he caught the eye of Waite High School beauty, Betty Jean Prince. Married in 1954 he was immediately drafted into the Army and deployed overseas where he helped rebuild the European phone network after the Korean War. Betty and Jim both had careers and retired from Ohio Bell Telephone, now AT&T. His early retirement from Ohio Bell allowed him to provide loving end-of-life care for his mother, mother-in-law, and wife. Shortly after Betty's death in 2000, Jim relocated from Toledo, Ohio to Austin, Texas where he lived alone until his younger son, Gregg Mikulak, joined him in 2006 for a business opportunity. After Gregg's untimely death in 2008 he then moved in with his elder son, James Kevin Mikulak, also a resident of Austin. Jim travelled the world during his time in Texas while also pursuing his goal of visiting all of the presidential libraries in the United States. A lover of both train travel and model trains he quickly took over one of the bedrooms and built an elaborate model train set. Jim cherished his family, his Texas pickup truck, and his miniature schnauzer, Cricket. James Paul Mikulak was a first generation American, a son, a veteran, a husband, an uncle, a grandfather, and a great grandfather. His charm and fun-loving personality will be missed by all who knew him. Jim was preceded in death by his beloved wife, Betty Prince Mikulak and younger son, Gregg Mikulak. Jim is survived by his sister, Camille Mikulak Staczek and her husband John of Seattle, Washington; his son, James Kevin Mikulak and wife Holly Ann Ahern of Austin, Texas; his brother-in-law John Franklin Prince and wife Ann E. Prince of Eustice, Florida; his daughter-in-law, Kathleen Gavin Mikulak of Atlanta, Georgia; his nephews, Jason Luis Staczek and Eric Jon Staczek; his adoring grandchildren, Eric Mikulak, Meghan McClanahan, Gavin Mikulak, Erin Mikulak, Brenden Mikulak, and Madison Mikulak; and his great grandchildren Flynn McClanahan, Macy McClanahan, and Bryce McClanahan. A private interment will be held at a later date.

James Paul Mikulak peacefully passed away on Thursday, February 3, 2022, at Brookdale Westlake Hills Assisted Living in Austin, Texas at the age of 87. Born on September 1, 1934 in Toledo, Ohio, Jim was the elder of two children of Polish immigrants,... View Obituary & Service Information

The family of James Paul Mikulak created this Life Tributes page to make it easy to share your memories.