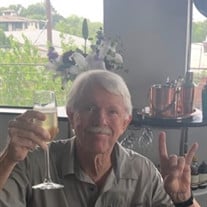 James "Jim" Guthrie, 77, died unexpectedly on March 12th 2022 in Austin, Texas with his wife, sister and children at his bedside while listening to Leonard Cohen's Halleluiah. Jim was born in Loma Linda, California on May 19th 1944 to James K and Margaret Guthrie (nee Gallaher). His father was a prominent member of the San Bernardino, California community where he was a founder and conductor of the San Bernardino Symphony and a newspaper executive. Jim met his wife Christine "Chris" in 1976 and they were married on March 4th 1978. Together they have two children and 3 granddaughters with another granddaughter expected this summer. Jim spent nearly four decades in the finance world. He started his career at Arthur Andersen where he was a consultant. His career then took him to CFO of jojo's and Naugles Restaurants, before moving on to Times Mirror in Southern California. He then moved with his family to Austin, Texas where he became CFO for IXC Communications. Late in his career he was able to slow down and spend time as a financial consultant. After retirement, Jim spent his post-retirement years traveling, playing with his granddaughters, and pursuing his true love of rescuing dogs. Jim is survived by his wife of 44 years, Chris, his sister Katie, his brother Bill, his two children Travis and Tyler, their spouses Stephani and Nathan and his three granddaughters Alexandra, Isabel, and Stevie. He is preceded in death by his mother, father, and older brother. Jim will be dearly missed by his family and those who knew him well for his wit, humor, and his love of his family. He was the heart of the Guthrie family. There will be a memorial service to remember Jim's life on April 9th at 4pm, at the Costa Bella Clubhouse located at 205 Bella Vista Cove, Austin TX 78734. In lieu of flowers, the family requests donations in Jim's honor to support his passion of rescuing his beloved animals. The charity Jim worked with was South Texas Rescue and Network, EIN#84-3609879, 28843 Casey Rd San Benito TX 78586, Paypal - [email protected]

James "Jim" Guthrie, 77, died unexpectedly on March 12th 2022 in Austin, Texas with his wife, sister and children at his bedside while listening to Leonard Cohen's Halleluiah. Jim was born in Loma Linda, California on May 19th 1944 to James... View Obituary & Service Information

The family of James Frederick Guthrie created this Life Tributes page to make it easy to share your memories.