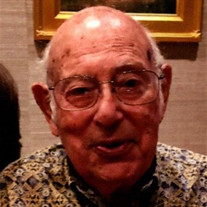 Jack Seriff passed away peacefully at his home surrounded by family on August 31, 2018 at the age of 97. Jack was born in Eagle Pass, Texas, on December 27, 1920. He grew up in San Antonio but came to Austin to attend the University of Texas in 1939 where he studied in some of the first computer science courses. He graduated with a BA in accounting before enlisting in the Navy. He went to midshipman school at Notre Dame and shipped out as a Lieutenant JG on the USS Stockard during World War II. After the war, he returned to Austin where he began a family with his wife, Claire Stein. In Jack’s first career, he owned two old-fashioned dime stores – Crestview Variety and Ford Village Variety at the then-extreme opposite ends of Austin. In the mid-1960s, Jack went on to work at the Austin Drug Company, computerizing their operations and helping them open a small chain of retail pharmacies. In the 1980s, Jack became Director of Forms Design from Texas Comptroller’s office where he designed new, easier-to-use tax forms that were used for decades by the State of Texas. To all of our great sadness, Dad lost his wife, Claire, to cancer in 1979. After many years alone, Dad remarried in 1998 to Sue Weinberger and became part of her family as well. Jack’s passions were his extended family, his synagogue and sports. He believed strongly in the importance of family and always had close relationships with his parents and in-laws, his children, grandchildren and great grandchildren, his siblings and cousins. He was active in Agudas Achim Synagogue where he was a member for over 70 years and served on the board of directors for more than 40 years including as president. While he was an avid sports fan, he was also an athlete as the star pitcher of the Synagogue’s slow-pitch softball team. He was excellent tennis player in to his 80s when he placed fourth in the national Senior Olympics. Whatever he was doing, he met all with a friendly smile and an outstretched hand. Jack is preceded in death by his parents, Abraham and Sarah Seriff, his first wife Claire Seriff and second wife, Sue Weinberger. He is survived by his children Leslie and Malcolm Slatko and Carolyn and Marc Seriff; his grandchildren Daniel Seriff, Jason and Elizabeth Seriff, Chaim Slatko and Lauren Slatko and his great-grandchildren Maya Seriff and BatSheva Slatko. The family would like to extend special thanks to Mark Elsea and all of his staff at SeniorMinded for the kind and compassionate care that so improved Jack’s quality of life for the last few years. Per Jewish tradition, we ask that no flowers be sent to the family. If you wish to honor Jack’s memory, the family would ask that you consider a donation to the Claire Seriff Fund, c/o Agudas Achim, 7300 Hart Lane, Austin, Texas 78731. Graveside service will be held at Austin Memorial Park, 2800 Hancock Drive, at 10:30 am on Sunday, September 2.

Jack Seriff passed away peacefully at his home surrounded by family on August 31, 2018 at the age of 97. Jack was born in Eagle Pass, Texas, on December 27, 1920. He grew up in San Antonio but came to Austin to attend the University of Texas... View Obituary & Service Information

The family of Jack Seriff created this Life Tributes page to make it easy to share your memories.

Jack Seriff passed away peacefully at his home surrounded by...