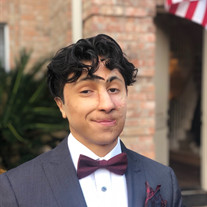 On March 29, 2001, fresh snow had fallen, and the bright sun was shining in Longmont, Colorado to welcome the birth of Ivan Sebastian Zavalney. Ivan died at his home in Austin, Texas on Monday, March 15th, 2021 due to a contraindication of medications. Ivan was loved by many and his infectious smile, generous heart, and intense zest for fun and life touched so many people. Although Ivan was born with a congenital giant facial nevus, he was a very healthy, happy, and giggling baby. In the years of his childhood, he was in the care of specialists and highly trained plastic surgeons to remove the nevus. We found and joined the family of Nevus Outreach in 2001 which provided amazing support and connections. His Austin life began in 2003 when his family moved to the Barton Hills neighborhood in Austin, Texas. He attended Barton Hills Elementary and later Eden Park Academy. In 2013, he and his family moved to Oslo, Norway where he continued his middle school years. While in Europe, he traveled to Sweden, Copenhagen, Germany, Prague, Hungary, Czech Republic, Austria, Switzerland, Spain, and Denmark. While living in the United States, he also traveled to Panama, Oregon, California, Colorado, Arizona, Illinois, and Utah. He had many adventures all over the world, seeing the Northern Lights, dog sledding, snowboarding, white water rafting, driving dune buggies on sand dunes, boogie boarding on the beaches, zip-lining, and paintball. On his return to Austin in 2015, he ended his middle school years at O 'Henry Middle School. He attended Stephen F. Austin High and graduated in 2019. Ivan had many passions and each one was pursued with intense vigor and excitement. His favorite hobby was skateboarding, mastering street style and teaching many along the way. It was all-consuming and an amazing outlet of free expression and drive that was part of his persona. During high school, he was active in theater working behind the scenes in lighting, sounds, and props. He loved music and would play around on a soundboard and software tools, perfecting his preferred beats with the most meticulous manner and energy. He assembled and built several personal computers, enjoyed tinkering with electronics, and helped friends and family with almost anything computer-related. He also loved to collect items, from coins, jewelry, shoes, and game cards. He is survived by his mother, Laura Jo Acuna Zavalney; his father, Paul Ivan Zavalney; his younger sister, Isabella Sophia Zavalney; and younger brother, Ian Stephan Zavalney. In Lieu of flowers, please send donations in his name to the Ronald McDonald Charities or Nevus Outreach. During many of his medical procedures, he and his family stayed in Ronald McDonald Houses and are forever grateful. Upcoming Event: A celebration of life ceremony will be held on Sunday, March 28th at the UMLAUF Sculpture Garden & Museum located at 605 Azie Morton Rd, Austin, TX 78704 from 9 AM to 11 AM. RSVP https://IvanZavalney.rsvpify.com

On March 29, 2001, fresh snow had fallen, and the bright sun was shining in Longmont, Colorado to welcome the birth of Ivan Sebastian Zavalney. Ivan died at his home in Austin, Texas on Monday, March 15th, 2021 due to a contraindication of medications.... View Obituary & Service Information

The family of Ivan Sebastian Zavalney created this Life Tributes page to make it easy to share your memories.