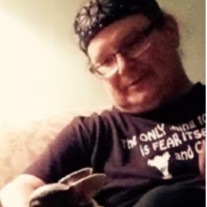 Isham Bradley Respess November 3, 1952 - August 23, 2021 Austin, Tx - Isham (Sonny) Respess, 68, Austin, Texas was reunited with his loyal little terrior, Xena, Warrior Princess, who passed just days before he did. He was surrounded by family and friends as he peacefully transitioned to his new digs and future adventures. Before moving to Austin, Isham became a master welder at the Newport News Shipyard in Virginia. He then moved to Austin with friends, answering a call from the Austin music scene to become every singer/song writer's most loyal audience member. He shared his love of music with everyone in his sphere, introducing us all to amazing talent and unwittingly, showing us a lifelong way to soothe our minds, heal our hearts and make us whole thru the gift of music. He widened his community of friends and family through cooking at local unique venues such as the Texas Chili Parlor, Old Pecan Street Cafe, Castle Hill, and Les Amis. Cooking became a way he expressed his love (yummy meals) and sometimes his displeasure (how many habaneros are IN this dish?!?). His work life transitioned to the tech world where he helped people solve problems, maintaining patience through the use of humor, truly one of his greatest assets. Isham's daughters will remember him as the dad who could not give up Schlitterbahn, reversing roles in adulthood and taking HIM to play, they will remember him through his colorful, comical drawings, the music they now love so much, food and family get-togethers. Isham's last wishes were found framed and hanging above the CD player - his drawing of Willie Nelson with the quote "Roll me up and smoke me when I die", so in lieu of a funeral, just take a moment to remember him through a favorite Willie Nelson song or. . . .! Memorials could go to: Health Alliance for Austin Musicians (HAAM) at: myhaam.org or Austin Justice for Our Neighbors at: jfonaustin.org As a family, we will always feel blessed by some of the beautiful words received from his friends as he was leaving this world: "Isham was a dear brother - kind, smart, wise. . . many good qualities in abundance - to those friends that walked moments along a shared path on earth." "Good night, Sonny, wherever you are - In our hearts and minds. Namaste." "Isham's had a very good life, a life of integrity. May he travel well through the spheres of the soul." "Sonny knew what Rainn Wilson once said, "there is no difference between art and prayer." Isham is preceded in death by his parents, William and Sue Respess and brother Jimmy Respess of Virginia. He is survived by his wife, Linda Miller, his daughters, Kelsey Mills (Cory), Tessa Miller (Warren), both of Austin, Tx. Sisters, Clarita Gay (Millard-deceased) of Newport News and Billie Miller (Dick) of Illinois, nieces and nephews: Victoria Respess, Kimberly Respess, and Will Respess (Amber), Ryan Respess (Kasey), Erin Miller (Derek), and Katy Titus (Jon), their children, and many friends who are now family.

The family of Isham Bradley Respess created this Life Tributes page to make it easy to share your memories.