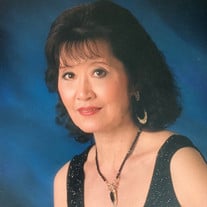 Ikuko (Koko) Moore passed away peacefully on June 30, 2021, at the age of 91. She was born August 3, 1929, in Hanamaki, Japan, the fourth child of Shinzo and Tokuko Fujiyama. She was one of five children. Koko was first married to Saburo Iwazaki in 1950 for a short time and had a daughter, Maki. Years later Koko met the love of her life, Robert S. Moore, at Tachikawa Air Force Base in Japan while working there as a civilian teletype operator. Robert and Koko were married in 1958 at Johnson Air Force Base in Japan and lived on the base for four years where Koko joined the Officer’s Wives Club and served with the Gray Ladies, a volunteer organization of the Red Cross. In 1962 Koko’s life as an adventurer took off when Robert was transferred to Schilling Air Force Base in Salina, Kansas, where their son, Richard, was born. The family returned to Japan in 1964 at which time Maki was officially adopted into the Moore family. During the years in Japan, Koko became an accomplished artist. Her paintings hung in her home for years and today are displayed in the homes of family and friends. In 1968 the family then moved to Baltimore, Maryland. Upon Robert’s retirement from the Air Force in 1969, the family moved to Austin, Texas, and Koko never left. The following years were spent raising children and perfecting many of her native dishes. Family and friends often reflect on the times they would gather at Koko’s home eating her famous fried rice and pork gyoza. After Robert passed away in 1978, Koko went back to school and began working at Austron in the accounting department until retirement in 1994. It was during this time that she became involved with ballroom dancing which became her passion. Koko continued gracing the dance floors at least once a week until she was 88 and was considered an excellent dancer winning many first-place prizes at competitions and showcases. Her only complaint was she had to compete within the younger age groups (those in their 60’s-70’s) because no one was competing in her age bracket. And yet she still came out on top many times. She was very proud of her accomplishments as a dancer and her family and friends loved watching her beauty and grace. Even while growing up in Japan Koko loved competing. She was the only athlete in the family with skills in both swimming and speed skating. Her sisters marveled at her abilities and said she would have qualified for the 1944 Olympics had it not been for the war that kept Japan from participating. Koko always maintained her strong will to look and be the best she could be and was very proud of her family. Her last few years were marked with advanced dementia and hearing difficulties. When the Covid pandemic hit, causing her to be isolated in her assisted living facility from family and friends, her dementia spiraled. Through it all she remained resilient and hopeful. She will be dearly missed by her family and friends. Koko is survived by her sisters, Kyoko Kobayashi, 97, and Yoko Yogai, 89, both of Tokyo, Japan; her daughter, Maki Perry of Seattle, Washington; her son, Richard Moore and daughter-in-law Risa of Austin, Texas, as well as extended family in the Baltimore area and many friends. She was preceded in death by her parents, husband Robert, and brothers Koki Fujiyama and Shiro Fujiyama. A celebration of life will be held on Wednesday, July 21, 10:00am at Cook-Walden Chapel of the Hills Funeral Home, 9700 Anderson Mill Road, Austin, Texas. Private interment will be held the following day at Fort Sam Houston National Cemetery, San Antonio, Texas.

Ikuko (Koko) Moore passed away peacefully on June 30, 2021, at the age of 91. She was born August 3, 1929, in Hanamaki, Japan, the fourth child of Shinzo and Tokuko Fujiyama. She was one of five children. Koko was first married to Saburo... View Obituary & Service Information

The family of Ikuko Moore created this Life Tributes page to make it easy to share your memories.