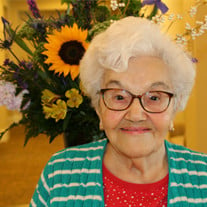 Helen Zell, a Holocaust Survivor, died on May 14, 2022. She was born in Zavidova, Czechoslovakia near Muncaz. Her father, Israel Berger, and mother, Sheindel Smulewicz, and siblings Goldie, Feige, Moishe Mayer, Bella and Rudya were victims of the Holocaust. Only Helen, Bella and Rudya survived. In April 1944 she was taken to the Ghetto Mukacevo. In 1944 she was imprisoned in Auschwitz, Ravensbruck and Leipzig concentration camps. Helen was part of the Death March in 1945 and was liberated by the Russians on August 5, 1945. She met her husband Wolf Zelovic (William Zell), another Holocaust Survivor, after she was freed. They were happily married for 55 years and he passed away in 2001. They flew from Prague to Brussels and onto LaGuardia Airport in New York. They arrived in the US in November, 1948 with their 6 month old son Sam, who was born in Czechoslovakia. They moved to McKeesport, PA and had another son Jeffrey. They subsequently moved to White Oak, PA and were actively involved with Gemilas Chesed Synagogue. William built a successful woodworking business, Zell Brothers, with his two brothers. Years later they moved to York, PA and became active members of Ohev Shalom Congregation. Helen moved to Austin, TX in 2015. Helen leaves behind her loving sons Sam (Arlene) in Austin and Jeff (Lauri) in Washington, DC. Helen has 6 loving grandchildren: Adam Zell (Rachel), Alana Seigel (Adam) and Lexie Zell (Alex) in Austin, Jason Zell (Kayleigh) in Washington, Carly Zell in Brooklyn and Ryan Zell in Austin. She has 9 amazing great-grandchildren: Evan, Benny, Goldie, Fiona, Hazel, Jude, William, Tali, Maya and many adoring friends and family. In lieu of flowers, the family would be grateful for memorial donations to the United States Holocaust Memorial Museum in Washington, DC.

Helen Zell, a Holocaust Survivor, died on May 14, 2022. She was born in Zavidova, Czechoslovakia near Muncaz. Her father, Israel Berger, and mother, Sheindel Smulewicz, and siblings Goldie, Feige, Moishe Mayer, Bella and Rudya were victims of... View Obituary & Service Information

The family of Helen Zell created this Life Tributes page to make it easy to share your memories.