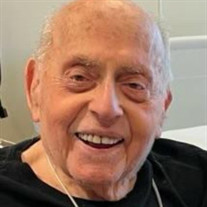 Harvey Stuart Evans, 87, husband, father, grandfather, businessman, philanthropist, and active member of the Austin Jewish community died on January 30,2022, at his home in Austin, Texas. He is survived by his loving and devoted wife of 63 years Gloria Evans, son Mitchell Evans and wife Liz, daughter Debbie Tello and husband Tony, granddaughter Rebecca Evans, sister Vicki Wolfarth and husband Eddie, niece Tammi Flyntz, and numerous other family members and friends. He was born April 10, 1934 in Brooklyn, New York to Max and Tillie Eisenpress. He earned a mathematics degree and a Doctor of Dental Surgery at NYU. His service in the Army brought Harvey and his wife Gloria to Fort Hood, Texas. Upon returning to New York, Harvey opened his own dental practice. Eventually, they relocated permanently to Austin in 1980 where they became founding members of the Austin Opera, the Long Center, and the JCC’s arts series. They have been involved extensively with Ballet Austin and in the expansion of many local arts organizations. Their most recent contribution was a substantial gift for the Harvey and Gloria Evans performing Arts Center at the Jewish Community Center. Harvey lived a long and blessed life. He had a remarkable zest for life and loved to talk with anybody and everybody. Harvey had a passion for family, Judaism, travel, real estate, good food, and the arts. He traveled extensively around the world with family and made friends wherever he went. He was a caring and loving husband, father, grandfather, brother, and friend to many and will be loved and missed by all. The family would like to thank the staff of Altus Hospice and the caregivers of ComForCare for the exceptional care administered during Harvey’s final weeks. The family would also like to express appreciation and special thanks for the love and support of close family friend Hormoz Sayhoon. In addition, the family extends their gratitude for the support from members of the Jewish community. Services to be handled by Austin Natural Funerals and a graveside service for the family to be officiated by Rabbi Neil Blumofe of Congregation Agudas Achim. Donations in memory may be made to: The Austin Opera Ballet Austin Shalom Austin

Harvey Stuart Evans, 87, husband, father, grandfather, businessman, philanthropist, and active member of the Austin Jewish community died on January 30,2022, at his home in Austin, Texas. He is survived by his loving and devoted wife of 63... View Obituary & Service Information

The family of Harvey Stuart Evans created this Life Tributes page to make it easy to share your memories.