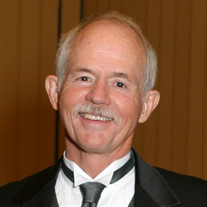 WARNER, George Arlon, Jr., 73, passed away on April 25, 2019, with his family by his side. A devoted husband and loving father, George was born in Mercedes, Texas on September 5, 1945. He was raised in Galveston and Texas City, Texas and was the second eldest sibling of four. He attended Southwestern University in Georgetown, Texas, earning a Bachelor of Arts degree in Physical Education and lettering in Baseball for four years. He graduated in 1967, with honors, and continued his education at the University of Texas at Austin, earning a Master’s Degree in Physical Education, in 1969. After being drafted and serving two-years in the Army, George met the love of his life, Linda Stanley Warner, and they settled in Georgia briefly before moving back to Texas. He taught physical education and coached at junior and senior high schools in Wheeler County, Georgia and then in Corpus Christi, Texas. As a coach, he focused on Baseball, and guided his 1973 South Park Junior High team to the Corpus Christi City Championship. Soon after, George returned to the University of Texas and earned a Doctorate of Jurisprudence in 1976. George started his legal career at the Texas Real Estate Commission in 1978 and then in 1983, took an Assistant Attorney General position with the Texas Attorney General’s Office in Austin. For over 25 years in the State and County, General Litigation, and Administrative Law Divisions, he represented State agencies in civil and administrative matters in the Texas district courts, Courts of Appeals and the Texas Supreme Court. His main clients were the Texas Education Agency, State Board of Education, Texas Real Estate Commission and the Texas Racing Commission. George was also certified in Civil Litigation and Appellate Law by the Texas Board of Legal Specialization. He retired from the Attorney General’s Office and active legal practice in 2008. During his tenure as an attorney, he presented oral argument in all fourteen Texas Courts of Appeals, the Texas Supreme Court, and in the U.S. Court of Appeals for the Fifth Circuit. In addition, he also filed briefing with the U.S. Supreme Court on a couple of occasions. George had a true appreciation and respect for the law and thoroughly enjoyed mentoring young lawyers throughout his tenure at the Attorney General’s Office. Outside of his profession, George had a passion for Baseball that began when he was a child and he coached many young men in the sport, including his son in the Pony and Colt Leagues at the West Austin Youth Association. He loved all UT athletics and instilled this love for The University in his children, who all attended and earned degrees from UT. George also loved to swim and jog, using both activities for physical exercise as well as a “time of reflection.” Once retired, George and his wife, Linda, enjoyed traveling abroad. He especially enjoyed making annual trips to San Francisco in the summer and to Maryland and Virginia in the fall. He and Linda also traveled internationally to the Czech Republic, Turkey, Scotland, England, France and Greece. George was completely devoted to his family and gave everything to provide for his wife and children. He is survived by his wife, Linda, of forty-eight years, and his three children, Jason and his wife Jenny Warner of Austin, Rachel and her husband Mario Perez of Austin, and Hayley and her husband Tad Fielder of Dallas. George had seven grandchildren, Sophia, Noah, Liam, Isla, Reece, Blaine, and Weston, and was looking forward to the birth of his eighth, his third granddaughter, this Fall. George is also survived by his sister Arleene Sherwood of Houston, sister Terry and her husband Michael Miller of Spring, Texas, and brother Marc and Deanna Warner of Austin. A private memorial ceremony will be held in his honor. The family would like to thank the doctors and medical staff who cared for him over the years, especially the Nursing staff at Seton Hospital-Main that took care of George in his final days in the Intermediate Care Unit on 4th Floor South; specifically Windy, Tori, and Marilyn.

WARNER, George Arlon, Jr., 73, passed away on April 25, 2019, with his family by his side. A devoted husband and loving father, George was born in Mercedes, Texas on September 5, 1945. He was raised in Galveston and Texas City, Texas and was... View Obituary & Service Information

The family of George Arlon Warner Jr. created this Life Tributes page to make it easy to share your memories.