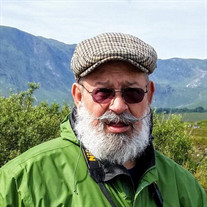 Frank Joseph Garcia, born January 2, 1949 in St. Paul, Minnesota, died on March 3, 2020 in Austin, Texas at the age of 71. Third of four children to Gloria Caroline Arver and George Garcia, Frank was the mischief maker in the family. As his mother used to say, whenever the family went out, she’d watch the other three kids and his dad would have to keep an eye on Frank. Frank’s father was a sergeant in the United States Air Force stationed around the world bringing his family with him. Frank spent his childhood in Japan and Spain and later finished high school in Salina, Kansas. One day working as a welder building a bridge, he dropped his gloves and, in driving in the cold rain quit that same day and enlisted in the USAF. Frank was trained as an instruments specialist responsible for airplane systems. He was stationed in the Philippines, Okinawa, Germany, and Lubbock, Texas. It was during the short station at Reese Air Force Base in Lubbock, TX Frank met a Texas Tech graduate student, Lupe Mandujano through a mutual friend. They married in 1975 in San Antonio, TX. Shortly after their wedding, Frank was stationed at Hill Air Force Base in Ogden, UT. A very short year later he was transferred to Bergstrom Air Force Base in Austin where he began his long career as a Master Trainer. While in the Air Force he completed three degrees in instructional development, computer engineering, human resources and other areas of too numerous to track. He loved learning and when he found an area that piqued his interest, or he felt he needed to master he would pursue it until he became a master on the subject. In 1978 Frank and Lupe had their first child, Gloria and what they had hoped would be a very short stay in the Central Texas “swamp” turned out to be their permanent home. He was discharged from the Air Force in 1979 and began working as an electronics instructor at Southwest School of Electronics and eventually became the director. In 1980, they welcomed their second child, Emilia – known as “Mimi.” Frank was a devoted father and active in the lives of both his children. Throughout both Gloria’s and Mimi’s high school years Frank and Lupe were boosters of the Austin High School Orchestra, hosting epic garage sales to raise funds for travel concerts and chaperones on trips. In 1999, Frank began working at Tokyo Electron Limited (TEL), a Japanese company that makes capital equipment for the semiconductor industry. He worked for TEL for 21 years as a curriculum developer, trainer, and mentor. Frank traveled extensively throughout the country and the world during his time with TEL. When Lupe and Frank became empty-nesters they traveled the world together – Israel, Japan, China, Spain, Europe and so many other places. Frank was the consummate Renaissance man. He had a deep love and appreciation for music, from classical to opera to Led Zeppelin, Pink Floyd, and the Moody Blues. He was a skilled storyteller, often sharing the tales of his youth, such as the time he and his football buddies decided to shave their heads and sport mohawks and how his father insisted that he wear a hat when they were out together. His headwear of choice: a Viking helmet with horns! He loved being involved in the lives of his two daughters when they were young and later, enjoying watching his grandchildren grow. Frank was a talented woodworker and craftsman, producing gorgeous pieces that he gave freely to his friends, family, and colleagues. Frank was also a generous philanthropist, supporting to work of Partnerships for Children through their Holiday Wishes program as well as the efforts of the Juvenile Diabetes Research Foundation (JDRG). Frank loved his family deeply and though not a man of many words to express that love, everyone who ever met him knew in their hearts they had met a great and wonderful man. Frank is survived by his wife Lupe Mandujano Garcia, daughters Gloria Litt and Mimi Garcia, sons-in-law Andrew Litt and Ken Cameron, four beautiful grandchildren Ben, Molly, Kathryn, and Jonathan, and his brothers and sister Carolyn, George, and David Garcia. In lieu of flowers, the family asks that donations be made to the Partnerships for Children, the Juvenile Diabetes Research Fund (JDRF), or a charity of your choice.

Frank Joseph Garcia, born January 2, 1949 in St. Paul, Minnesota, died on March 3, 2020 in Austin, Texas at the age of 71. Third of four children to Gloria Caroline Arver and George Garcia, Frank was the mischief maker in the family. As his... View Obituary & Service Information

The family of Frank Joseph Garcia created this Life Tributes page to make it easy to share your memories.