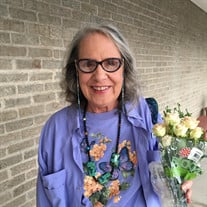 Frances Ruth Miller Taub Elliott One of our better angels has been taken from us. It is with great sadness that we inform you that our matriarch, Frances Ruth Miller Taub Elliott passed away suddenly due to natural causes. She was 76 years old. Ruth, one of the most caring and nurturing people, mother to Tobi and Tina, was grandmother to Gabi, Carmen, Kaylyn, Edward and Audrey; mother-in-law to Arnie Montemayor and Deb Seaman; bonus-mom to Vince, Dawn, Alden and Alexa; eldest sister to Mark (predeceased) and twins Peter and Paul; aunt to Paula, Eric, Tisha and Amber; sister-in-law to Betty, Larry and Jack. Ruth, affectionately known as Ruthie, daughter of Frances Mechler and Henry Bru Miller, was born in San Antonio and grew up in nearby, small town Hondo, Texas. Her time spent in Catholic school not only elicited an appreciation for lessons in morality, but also evinced a stunning handwriting of a calligraphic caliber. As a History major, her college education took her to The University of Texas, TCU and ASC (now UT-Arlington). It was at UT-Austin where she and Betty Feir, her future sister-in-law became best of friends, and was introduced to her first husband Albert Taub, who survives her. She raised two daughters, Tobi and Tina, all the while helping Albert with his formidable construction business. Ruth was predeceased by her husband, Artie Elliott in September of 2017, following 25 years of love and happiness. The Elliott family would themselves also experience the positive virtues of Ruth’s joie de vive and her tireless and selfless care for Artie as he careened unsteadily through the ravages of Parkinson’s Disease. Ruth embodied the foremost tenets of both Catholicism and Judaism – love and care for one another, help “repair the world,” and respect oneself and each another. Her care-taking ways began early, looking after her 3 younger brothers. Later on, becoming “Gramzy” to Tina and Arnie’s two adorable babies, Gabi and Carmen, she cared for them every day from toddler through adolescence, while Tina resumed her postdoctoral research work in the lab. Their relationship with “Gramzy” was extraordinarily special. Ruthie, a charming woman with twinkling brown eyes and always a smile, was primarily interested in seeing as much beauty as the world could muster – in her love of Church and Synagogue; folk and spiritual music; sunsets; her huge and varied garden; travel, theater, art and museums. Her interest in progressive politics underscored her desire to see a world improved for all. To speak lovingly of Ruth Elliott is perhaps the only way to speak of her. As it is said, Tobi and Tina did not fall far from their maternal “tree.” They embody her best qualities, and of this, she was proud and humble. On what was her final day on this earthly plane, her beautiful spirit shone through the exemplary sunset in the rays sinking over The Hill Country. One would be hard-pressed to think of another in her league of affability. Therefore, one might think that the world’s allotment of gentility has been reduced, but that would be the wrong conclusion. Because Ruthie’s best qualities of love and compassion will live on in all those who knew and loved her. The name Ruth in Hebrew means companion, loyal friend and vision of beauty. In the Bible, Ruth was the great grandmother of King David, the second king of ancient Israel; and, the Creator of the walled city of Jerusalem. What an honor for her to be named Ruth. In lieu of flowers, please donate to Ruth's favorite NYC museum, The Frick, or Emancipet in Austin. Ruth’s Memorial will be 2p-4p February 3, 2019 at Sterling Event Center in Austin, Texas.

The family of Frances Ruth Elliott created this Life Tributes page to make it easy to share your memories.


One of our better angels has...