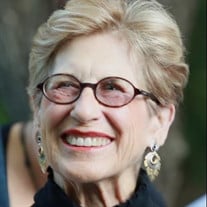 Florence Ann Abram Midlo passed away June 8, 2019 from Parkinson’s Disease and associated complications. She is survived by Maury Midlo, her husband of 62 years, two children, Bennett Midlo and Marianne Rochelle, their spouses Marcy Midlo and Martin Rochelle, and two grandchildren, Michelle and Charlie Midlo. Several nieces, nephews, many cousins and friends were an essential part of her family. Florence Ann, called F.A. by most, was born in Lufkin, TX on July 26, 1935. From the 1860’s until the early 1970’s, the Abram family resided in Lufkin where they were successful department store owners, active members of the small Jewish community, and civic leaders. F.A. was greatly influenced by her years in Lufkin where she excelled in the classroom, had many very close friends and developed the social skills and sense of humor which were her hallmark throughout life. She attended Newcomb College of Tulane University from 1952-56, graduating Phi Beta Kappa and with honors in Biology. Living in an era that did not encourage or welcome women in medical school, she worked at Tulane Medical School in research labs and in the Ph.D. program in Anatomy. Her work and teaching there and then advising Newcomb undergraduates covered a period of 24 years. A career change in 1982 led her to spend 8 years fundraising and promoting political activities in the Jewish community of New Orleans. She never lost her interest in the medical world or the communities in Lufkin, New Orleans, Wimberley and Austin. She served in leadership positions at her Temples in New Orleans and Austin, and her work with numerous other Jewish organizations enhanced her leadership skills. F.A. enjoyed her family and friends and her Jewish life. She was especially drawn to her early childhood friends in Lufkin and continued a lifelong affiliation with Newcomb/Tulane where she achieved both an academic and social life beyond all expectations. But, it was her family which thrilled her the most. Her husband Maury was a devoted lifelong mate who continuously inspired her intellectual and creative interests. Her son Bennett, a lawyer in Houston and a graduate of Harvard, made her extremely proud. Her daughter Marianne became her soul-mate, helpmate, and the most loving daughter, who eventually helped her mother cope with life’s challenges. F.A.’s relationship with her sister Sharlene Block, which exemplified the strongest of family ties, was based on humor and small-town values, and was admired by their lifelong friends. F.A.’s Jewish affiliation and love of her Jewish communities became the day-to-day influence in her life. It shaped her commitment to justice, her financial and volunteer time in support of Jewish causes, and the love of people in Israel. In 2013, she received a special recognition award from the Jewish Community Association of Austin (Federation) for “Women’s Division Mentorship.” There will be a memorial service to honor F.A. on Tuesday, June 11 at Temple Beth Shalom, 7300 Hart Ln, Austin, TX 78731 beginning at 6:30 pm. A gathering will follow in the social hall. If you would like to honor her memory with a donation, her wishes were to either Temple Beth Shalom - https://www.bethshalomaustin.org/give or Shalom Austin - Women’s Philanthropy - https://shalomaustin.org/tribute (designate: Women’s Philanthropy) - both located at 7300 Hart Ln. Austin, TX 78731.

The family of F.A. Midlo created this Life Tributes page to make it easy to share your memories.